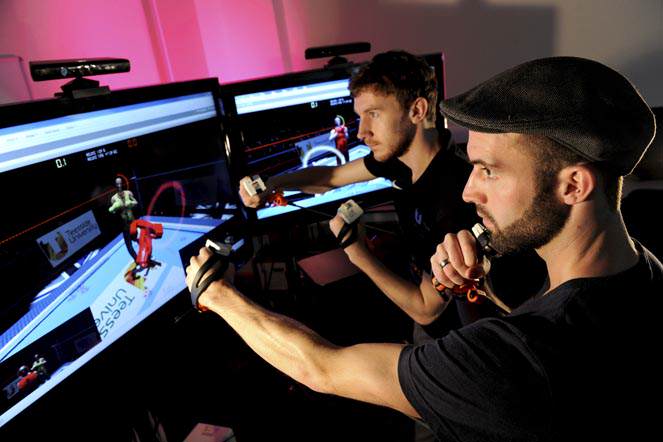 A ground-breaking new way of using gaming to keep fit is being taken to the next level with the help of a Kickstarter campaign.

The Realm System, which was spun out of research at Teesside University, is the world’s first gaming system to incorporate force and resistance into its game play to provide a full workout whilst playing.

For the first time ever, the amount of energy a player uses can be incorporated into the way games are played to deliver real health benefits.

Realm is now launching a Kickstarter campaign to raise approximately £80,000 (AUS$160,000) to provide developer kits for games programmers and players across the world to help them find new, creative applications for the technology.

The cross-platform ‘exergaming technology’ was developed from research by Professor Iain Spears, an expert in computational biomechanics at Teesside University’s School of Social Sciences, Business & Law.

The Realm System is a company founded by Australian marketing professional Matt Long to commercialise the technology of behalf of DMD and Shadowboxer.

Using a unique algorithm, Realm can calculate how hard a player is working and translate that into game play, from wielding a sword to throwing a punch to holding a rifle.

This information can then be measured and the player can be provided with incredibly accurate biometric information, such as force, power and energy expenditure.

Realm can also be coupled with a virtual reality headset, such as Oculus Rift, to provide a truly immersive gameplay experience.

The resistance bands mean there is no cheating the system and workouts using Realm are estimated to be four times more effective than other motion tracking gaming systems.

Dr Lagadec said: “Realm has the potential to be a powerful tool to improving people’s health and wellbeing.

“From helping solve problems of obesity and diabetes to simply being an enjoyable way to keep fit and healthy, there are countless applications for Realm.

“We’re hoping that this Kickstarter campaign will accelerate its development and find new ways to use this technology to change the way we play games and exercise.”

Matt Long, Co-founder of Realm, added: “Using strength to determine the outcome of the games we play is something that has not been seen before.

“By adding force to our game play Realm provides a much more immersive experience.

“We’re hoping that with this Kickstarter campaign we can persuade developers to get their hands dirty and take Realm to the next level.”

For more information on Realm and the Kickstarter campaign visit www.therealmsystem.com.

A movement to lift the aspirations of young women across the Tees region is being launched. The Power of Women campaign will focus particularly on […]

One of Teesside’s oldest law firms has a youthful new look to it, but the message from Punch Robson’s expanding probate and wills’ department is […]

Darlington Building Society has posted strong results after rising to the unprecedented challenges of the pandemic. Chief executive Andrew Craddock talks to Peter Barron… During […]