Stockton firm Visualsoft has featured in the Technology Fast 500 EMEA 2015, published by Deloitte, which recognises the leading technology companies in the world.

Visualsoft, which offers a range of eCommerce solutions including website design, development, online marketing services and training, was ranked at number 471 in the table, which was published earlier this month.

The news comes after a successful month for the agency. In addition to being shortlisted for three awards in the Northern Digital Awards, the team also celebrated a further hat-trick of finalist positions in the Employee Engagement Awards.

Revenue growth is now calculated for the last four years rather than five, and the revamped sectors are software, hardware, communications, media, life sciences and clean technology.

“Achieving a position in the EMEA Fast 500 is always an impressive feat but the rates of growth for this year are particularly inspiring,” says David Cobb, Deloitte UK partner and partner-in charge of the Deloitte Technology Fast 500TM EMEA program. 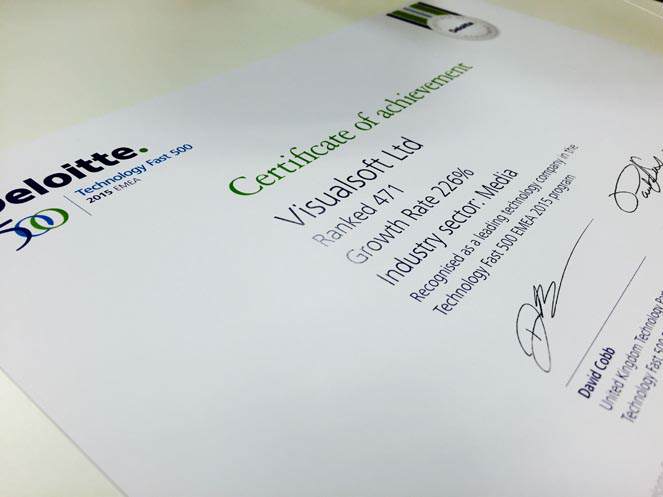 Visualsoft brand manager Sarah McCormick added: “We’re absolutely thrilled to be rounding off 2015 with a place in the Deloitte Technology Fast 500 TM program.

“Overall the UK provides just 72 of the top 500 companies in the list, so this is an amazing achievement for us.”

Twenty-eight countries featured in this year’s rankings, with 56% of entries from Western European countries.

Teesside-based oil and gas service company Tracerco, part of Johnson Matthey, is expanding its reservoir surveillance capabilities with the launch of its new digital offering […]

A new app has been launched by Middlesbrough Council to support the town’s recovery from lockdown. The Visit Middlesbrough app hosts information on the town […]

Coffee specialists with two Middlesbrough outlets are creating a stir after winning a prestigious industry gong that puts them in the top 1.6 per cent […]