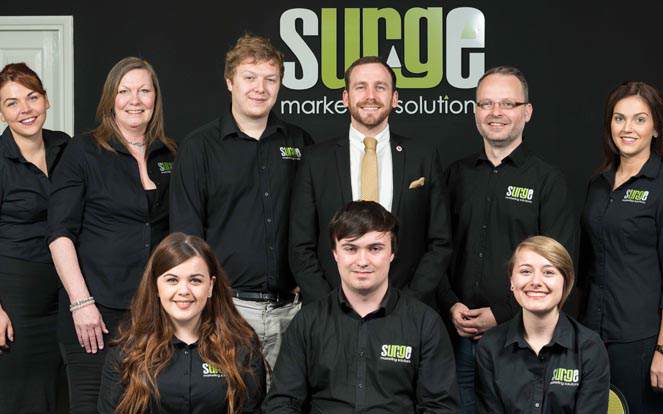 A Tees digital marketing agency is celebrating its second year in business, with further expansion to its team.

The agency recruited two new members of staff to cope with the growing demand for its services after a string of successful contracts, including its work with Lightwater Valley.

Sophie Heward, from Middlesbrough, has been recruited as a content writer after recently completing a degree in magazine journalism.

Sophie said: “I’m thrilled to be given the opportunity to start my working career with Surge, as I have heard great things about the company.

“I am confident that I’ll be pushed creatively to be the best writer that I can be and I’m very excited to get started.”

Mark Jackson, from Durham, has been recruited as a graphic designer and with over 20 years’ experience in graphic design, he is certain to bolster the team’s designer capabilities.

Talking about his move to Surge, he said: “It’s fantastic to be part of the Surge team and getting to work on website design is a new and exciting avenue for me.

“Surge already has some great clients and the projects we’re working on now and for the future makes this a great time to be part of this growing company.”

The new additions bring the team at Surge to nine, highlighting the company’s significant growth from having just two employees in May 2014.

“We are thrilled to have taken on two new, very talented members of staff, who we feel will thrive within the company and we are very excited to see what they bring,” said Surge managing director, David Porter.

He added: “I’m a great believer in karma. There’s also nothing more exciting than seeing budding entrepreneurship within the local community.

“I was made bankrupt in 2008 after a restaurant I owned went under during the recession. But I didn’t let that put me off. You have to see the bigger picture in life, get back on your horse and be ready to ride again.

“In 2014 we went limited and re branded as Surge Marketing Solutions ltd to better represent the range of services we offered.

“If it wasn’t for the support of those around me, I don’t think we would be in the position we are in today, and so I feel that it is our duty to give back and help local businesses thrive.”