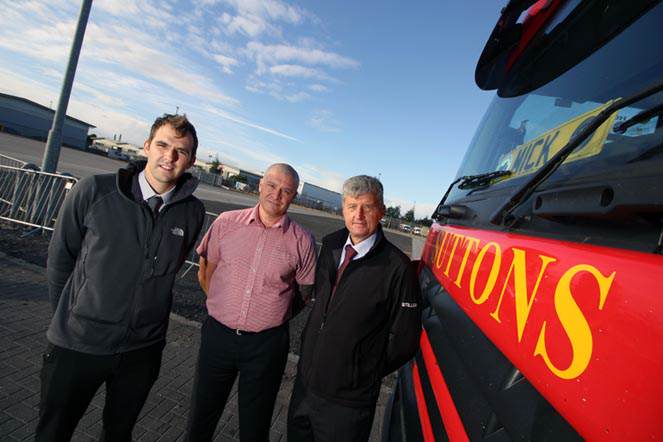 The construction division of Aycliffe-based Raisco has completed a £250,000 expansion and refurbishment of a 7,700 square metre lorry park at Suttons Tankers in Stockton.

The land, owned by Aycliffe firm Stiller Warehousing and Distribution, has almost doubled Suttons’ hard standing area for its 250-fleet of lorries while also making safety and environmental improvements.

The site previously consisted of loose hard standing with no drainage. Raisco has refurbished more than 4,500 square metres of heavy duty block paving and introduced new tarmac and concrete hard standing, while new drainage and a state-of-the-art petrol interceptor have also been installed.

Work began on June 20 and was completed by the end of September.

Raisco, which predominantly takes on steel fabrication and major construction contracts up and down the country, says the project is testament to the firm’s versatile capabilities.

“While we handle major steel contracts the length and breadth of Great Britain, our construction division continues to grow and we were delighted to work with two local firms on a project which will enable Sutton Tankers to expand its Teesside operations in the future.”

Stiller Warehousing and Distribution, which currently operates from a 23-acre head office complex on Aycliffe Business Park, owns the nine-acre Suttons site in Stockton as well as a three-acre site in the West Midlands.

“We’re delighted to have been part of this project and to assist our valuable tenants in order for them to be able to expand,” he said.

“The site is in a prime location on Preston Farm industrial estate and we’re always looking for ways to improve the standards and safety standards of all our properties.

“We’re delighted with the standard of the work carried out by Raisco. The company is based just around the corner from us in Newton Aycliffe, which shows that we always try to use local companies and suppliers whenever possible.

“This is a fine example of two Aycliffe companies coming together on a project and doing a great job for our clients.”

Suttons Tankers is part of the Suttons Group, a multi-national haulage and logistics firm which has sites in the UK, Germany, Belgium and around the world.

Its Stockton operations manager Darren Mathieson said: “This is a major development for Suttons which is going to benefit us hugely going forward.

“This is the biggest site within the Suttons group, which has 250 tankers going in and out of our depot on a daily basis, so to have all this extra space is going to make improve our operations and hopefully make us more efficient.”

Since being formed more than nine years ago, Raisco has rapidly grown into one of the country’s leading construction and steel fabrication firms, diversifying from purely a structural steel company to having the ability to provide a full construction turnkey package.

It now works with clients up and down the country and has delivered a wide range of fabrication and secondary steelwork projects for many of the construction industry’s well-known main contractors as well as turnkey solutions for end-user clients.

An award given posthumously to much-loved Zetland FM presenter Julie Donaldson, who sadly passed away from Covid last year, rounded off a memorable night of […]

Annalice Argyle once lived life as an addict, experiencing the horrendous lows of drink and drugs together with homelessness and abuse. Last Thursday she was […]

Winning the coveted SME of the Year Award at the Tees Businesswomen Awards was a complete shock to Bev Goodall, managing director of accountancy practice […]