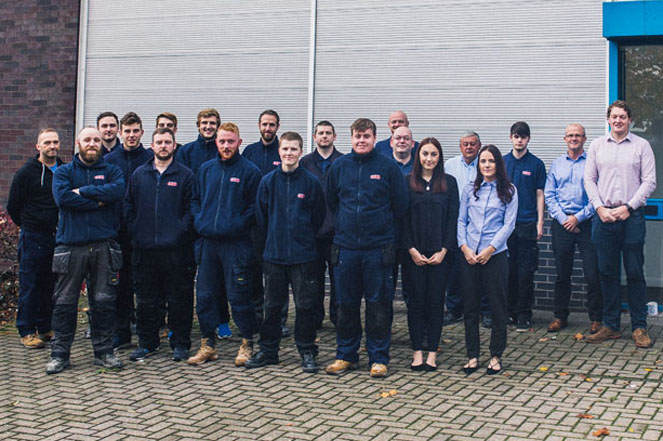 An expanding Teesside firm is crediting investment in the training of apprentices and a move to new premises for record sales and turnover this year.

Award-winning TFS Fire, Safety and Security Systems Limited began life from an office in managing director Kevin Hynes’ spare bedroom in Linthorpe, Middlesbrough, after he spotted a gap in the market back in 1994.

This summer it relocated to new premises at the town’s Riverside Park and increased its workforce to 15 engineers, including five apprentices. Like-for-like sales are up 35% on the last financial year.

Clients include all local authorities in the Tees Valley as well as Teesside University and both Cleveland and North Yorkshire Police.

“About eight years ago we began to realise there was a skills shortage and we took the decision to invest in training apprentices as fire and security engineers,” says Kevin, 60.

“Since then we’ve recruited two apprentices every year. This year we took on four, including two former SSI apprentices.

After quickly growing too big for Kevin’s house, the firm moved to offices in Stonehouse Street in Linthorpe village in 1998 before relocating to its current Drake Court offices in July 2015.

“We’d started to feel restricted, even though we were expanding,” says Kevin’s son David, the firm’s operations manager. “We now have purpose-built offices at Riverside Park with a boardroom, offices and workshops.

“We can invite people here to show them presentations when we’re bidding for important tenders. It means we now have the infrastructure in place to take on major jobs.

“Five years ago we had five engineers and now we have three times that number. Two of our engineers are former apprentices who we’ve kept on. Another two are into the final year of their apprenticeships and we aim to retain them, while three more are in the first year of their training.”

Another factor Kevin credits for much of the firm’s success story is the brave decision to appoint a sales director, Tony Cooney, at the height of the 2011 recession.

“Tony’s technical and sales experience has been invaluable in maintaining growth,” says Kevin.

Their impressive progress was rewarded in June when Hochiki, one of the leading manufacturers of fire safety products, invited them to London’s O2 Arena, where they were presented with the Outstanding Growth Award 2015/16.

“We’re tendering for more and far bigger jobs than ever before,” says Kevin. “During the summer we worked in 26 schools and over the course of this year we’ve completed ten full school fire systems.

“We’ve been working for about four years on a major project to upgrade Teesside University’s emergency lighting with a self-testing addressable LED emergency lighting system, which has many advantages including reducing costs by about 90%.

“All our work is commercial, mostly in the public sector, and we have excellent working relationships with all the area’s local authorities. We mostly operate within the North East but this year we completed a job on a luxury 80-bed nursing home in Surrey.”

The firm recently submitted a tender for its biggest contract yet. If successful they are likely to embark on a further recruitment campaign in the New Year.

One of the region’s oldest engineering firms is breaking new ground in global export markets, after heading back to the (virtual) classroom. Tomlinson Hall & […]