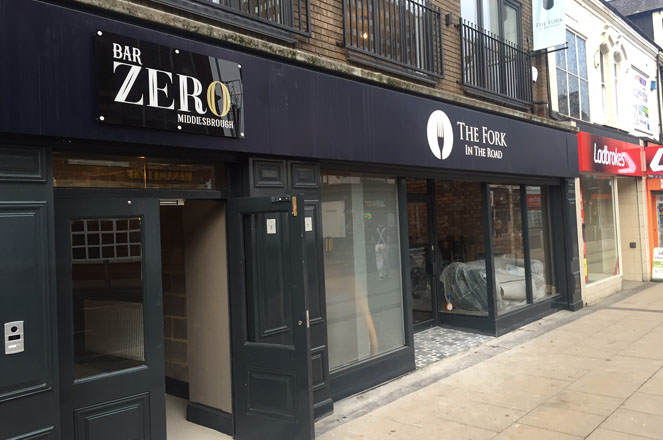 Popular local band Cattle and Cane together with comedian Fran Garritty will perform at the opening night of Teesside’s only dry bar as Dry January draws to a close on January 26.

Bar Zero is part of a charity-run, not-for-profit social enterprise that has already seen the successful launch of The Fork in the Road restaurant.

The bar will serve food, soft drinks, tea and coffee but no alcohol.

It is part of a wider programme to help people in the town with drink problems by giving them a place to meet and support each other, as well as welcoming anyone who just fancies a night away from the booze.

Bar Zero will also create volunteering, training and job opportunities for those in recovery who want to get into the catering industry.

It is located upstairs from The Fork in the Road in premises once home to popular toy shop Romer Parrish on Linthorpe Road, Middlesbrough.

Band Cattle and Cane readily agreed to perform at Bar Zero’s opening night, for which tickets are free, with singer Helen Hammill saying: “We feel privileged to be part of this initiative. There’s nothing like it in the area.

“Teesside is full of places selling alcohol so it’s amazing that there’ll now be a place people can go without that temptation.”

The three organisations also joined forces to launch The Fork in the Road, which is providing restaurant jobs to ex-offenders, recovering addicts and the long-term unemployed.

He said: “Bar Zero will offer those who do not want to drink alcohol a safe and welcoming environment to meet people and mix with friends.

“We led the Public Health England capital bid and CEO Sleepout has heavily invested in The Fork in the Road, with a view to the profits from the restaurant supporting the ongoing future of Bar Zero.

“What we hope is that this can help change lives by bringing people together, which can be motivational, inspirational and develop a sense of identity.”

The bar can also be hired for private functions and community events, while Andy plans to launch cinema nights where guests can enjoy blockbuster classics on a 15 foot screen from the comfort of a reclining armchair.

The final part of the project will be the launch in the near future of a community café to provide a stepping stone for workers in recovery from alcohol and other addictions but who are not ready to work in an environment where alcohol is served.

CEO Sleepout inspires business leaders to raise funds by being sponsored to sleep in the open for a night, with at least 15% of all funds returning to fund projects such as The Fork in the Road on Teesside.

Under Andy’s guidance as its founder-chairman, CEO Sleepout has now raised more than £1 million for funds supporting those affected by homelessness and addiction.

More than 1,000 businesspeople, politicians and clergy have given up their beds to sleep out in landmark locations such as Wembley, Lord’s and The Oval in London, Newcastle’s St James’ Park, Manchester’s Old Trafford cricket ground and both the Riverside Stadium and Preston Park Museum here on Teesside.

• Bar Zero will initially be open on Friday and Saturday evenings, 7pm-11pm, starting from Friday January 27. Those wishing to add their name to a waiting list for any remaining free tickets for Bar Zero’s launch night on January 26 should message Bar Zero via its Facebook page.

We caught up with Paul Davison (pictured), commercial director at Erimus Insurance Brokers, to discuss the current state of play in the insurance market… Has […]

The world has pivoted for personal search provider OCALS, a one-stop service for all conveyancing requirements – and boss Jeremy O’Connor is excited to offer […]

Phil Teasdale is a man with a mission – to train and support businesses to grow and develop after coronavirus. His strategy includes his company […]