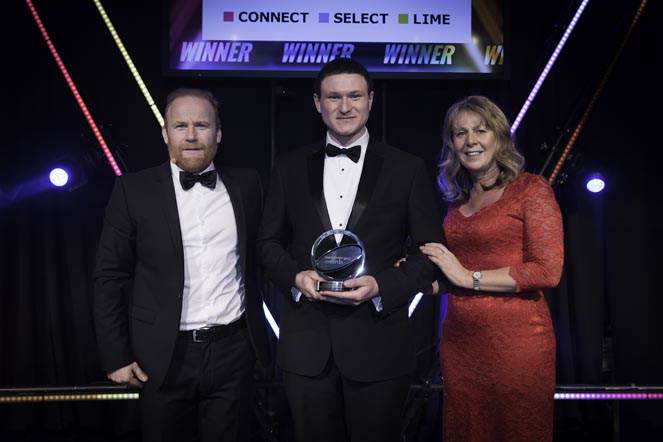 Teesside financial planners Bob Little & Co are celebrating after beating off fierce competition to be crowned North East Adviser Firm of the Year.

The prestigious trophy was presented to director Robert Little at the Professional Adviser Awards’ annual black-tie dinner at The Brewery in London.

“We’re all absolutely delighted,” said Robert, who at 28 is one of the country’s youngest Chartered Financial Planners. “It’s the first award I’ve won since rugby trophies when I was a kid!

“The competition was extremely stiff and some of the others firms on the shortlist have multiple offices across the region.

“When our name was read out I thought we’d come second, which I was pleased with. Then it came up on the screen that we were the winners and I realised I had to go up and collect the trophy!”

Entrants were asked to tackle case studies on retirement planning, tax planning and investments, as well as answering questions about the firm and how it treats clients.

“We’re proud of the technical knowledge we have here and the case studies are a good way of applying that expertise to real situations,” says Robert, who includes a First Class degree in Financial Economics among his impressive list of qualifications.

“But it’s also very important to us that we keep our focus firmly on our clients at all times, and we have processes in place and an ethical code that help us to continue doing that.”

“We’ve been around for over 30 years now, since my dad started the business, and have stood the test of time,” he says.

“Being awarded Chartered status by the Chartered Insurance Institute was very important because that’s the gold standard among advisers and is something that very few financial firms in the UK and especially the north east have achieved.

“Both awards such as this one and being Chartered give us external validation. It’s one thing believing we’re good at what we do, but we think it’s important to get outside recognition as well. It helps us to benchmark ourselves in relation to our competitors.”

The firm, which employs four advisers and seven support staff, is based at Kirkleatham Business Park in Redcar. It offers advice on a wide range of areas including savings and investments, retirement planning, mortgages and tax planning.

This latest honour comes just two months after Robert was among the finalists in the Personal Finance Society’s Investment Advice Specialist category in a ceremony at Wembley Stadium.