Get Noticed Branding and Mustachio Design have both signed a two-year lease to take up new office space at Middlesbrough’s Boho One after a strong period of growth.

The two firms, both formed in 2014, have ambitious plans to grow after collaborating on a number of projects.

The move is further testament of how collaboration continues to help many businesses based at Boho One and the new Boho Five building just a short walk away.

Matthew Hulbert, from Stokesley, formed Mustachio Design in 2014 and has since developed a patented golf training aid, called OGI, which he successfully crowd-funded whilst selling 170 pre-orders to 20 different countries via Indigogo.

Matthew, who studied a Masters in product and innovation at Teesside University, says: “Being part of the creative and digital hub in the Boho Zone is really important to us. 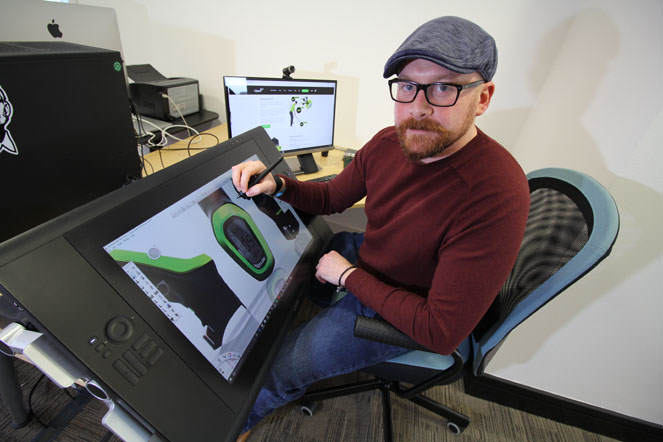 “We’re now looking to grow a team, with at least four operating from our studio. We’ve built a strong brand with OGI and we’re excited about other ventures we have in the pipeline.”

Mark, 36, from Guisborough, who has a BA Hons degree in graphic design from Teesside University, also formed Get Noticed Branding three years ago.

Previously based in Stokesley, he spent 10 months in Boho Five before moving to Boho One.

“Initially moving to Boho Five was a big step for me but it proved to be the right decision as it accelerated the growth of the business and realised my ambition to be in Boho One faster,” he reflects. 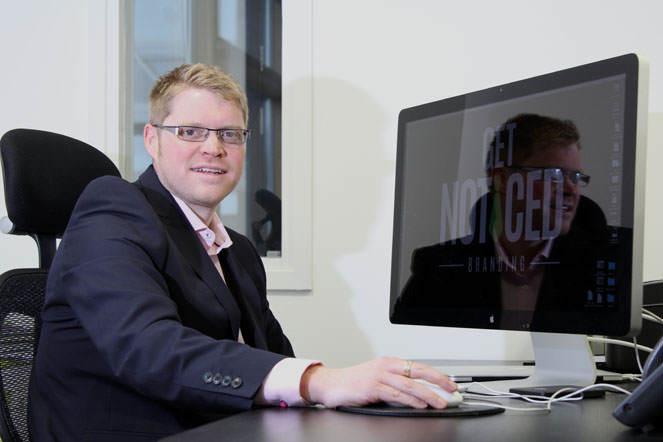 “Boho Five was a perfect stepping stone as it allowed me the opportunity to take state-of-the art office space that suited my needs at the time, without overstretching myself.

“There’s a great atmosphere here and some top companies to be around. We’ve already collaborated with a number of firms here including The Creative Alchemist.

“I’m a firm believer in steady and reliable growth. We both want to grow organically – and Boho Five and Boho One have enabled us to do just that.”

Aimed at new and growing businesses, the state-of-the-art Boho Five building is the latest edition to the town’s thriving digital and creative sector.

The building offers small and medium sized enterprises the perfect setting in which to get their businesses off the ground and equip them with everything they need to succeed in this dynamic and fast-moving sector.

Following a period of fast growth, The Creative Alchemist, Ithica Films, Appamondo and Virtual Armor have all expanded, while staying firmly put in Middlesbrough’s Boho One building.

The move has seen Virtual Armor relocate to the second floor of Boho One, Ithica Films triple their existing office space with a new location on the ground floor, The Creative Alchemist move into new space boasting an additional 240 sq ft with access to an outdoor terrace and, finally, Appamondo will expand into a new office almost treble the size of their previous home – taking a full floor in the front tower.

The combined success of the businesses in Boho One has been phenomenal, with the four companies attracting new clients and adding to their workforce in 2016.

Lisa Holt, MD at The Creative Alchemist, says: “It’s great to see so many digital and creative businesses experiencing this level of growth in The Boho Zone – it’s testament to the sense of community and business benefits that Boho One and Boho Five offer their tenants.

“Lots of businesses in here are growing and expanding by working together – it’s the best place to be for creative and digital businesses on Teesside.”

• Businesses interested in relocating to Boho One or Boho Five can call 01642 224706 or email bohofive@icloud.com to arrange a viewing.

An adopted Teessider has opened up about the incredible success of his fast-growing business empire, citing grit, determination, a willingness to work hard, a refusal […]

Chartered accountancy firm Baines Jewitt has welcomed 19-year-old Lewis Poppleton from Norton to join its practice. Prior to starting work at Baines Jewitt, Lewis was […]