An entrepreneur who dreamt of being an astronaut as a child will oversee a rocket launch from North East soil when his company sends scores of tiny satellites into space.

Pioneering work by space engineer Shaun Whitehead is paving the way for scientists to send their experiments into orbit on miniscule femtosatellites, work which could lead to the creation of around 100 skilled jobs in the region.

Shaun’s company Scoutek is working with Teesside University to develop a low cost rocket – a StratoBooster, which ascends on a meteorological balloon – to launch these femtosatellites which the company has called ThumbSats, in what will be the first civilian space mission to launch in the UK.

Shaun has worked closely with the North East Satellite Applications Centre of Excellence, supported by Business Durham, the economic development organisation for County Durham, and will be speaking at their space conference on March 22.

Saltburn-based Scoutek has earmarked Sedgefield’s technology park NETPark as one of four possible sites from which to launch its first, unfuelled test rocket in March as part of the ‘tu2space’ project.

A ThumbSat is no larger than a human thumb – hence its name – yet features a high-definition camera, a variety of lenses than can act as both microscopes and telescopes, and a sophisticated onboard computer.

“The rocket needed to put ThumbSat into space is no taller than a piece of A4 paper, and we can launch that on a meteorological balloon,” said Shaun, who designed his first rocket at the age of ten. 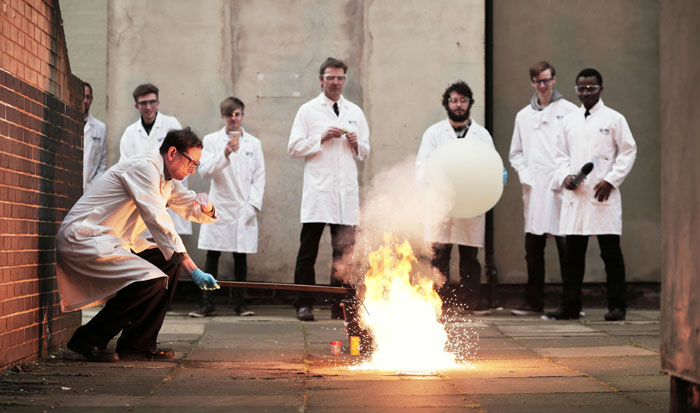 “This will be the first civilian space mission to launch from UK soil and Teesside University will have the first student team in the world to put a rocket into space.”

The tiny satellites, which are being manufactured and tested in the US and Mexico and are expected to fly on a Mexican Space Agency mission in the coming months, will allow professional and amateur scientists to send experiments into space.

Scoutek will provide a full service, helping to build the micro experiments to fit on ThumbSat, launch them into space and then collect data from numerous ground stations around the world.

The company has already designed the specialist software defined radios required at ground level to collect the satellite data, and Shaun said the future manufacture of the radios would be outsourced to companies in the region where possible.

“These radios will go into automated tracking stations. Everything that is required for a ground station system can be done in the North East and Scoutek wants to bring as much of it to the region as possible,” said Shaun.

“While Scoutek won’t do this inhouse, we expect that 100 jobs will be created in the North East because of the work we are doing. The spin off of ThumbSat could bring up to £10m in revenue to the region in the next five years.”

To support its work, Scoutek was recently awarded a place on Business Durham’s space incubation programme, backed by the UK Space Agency.

Catherine Johns, innovation director of Business Durham, said: “The innovative work Scoutek is doing is incredibly exciting, both for those involved and for those watching and waiting for this first rocket launch here in the North East.

“Scoutek is one of a growing number of companies making great strides in the region’s space and satellite industry, and behind these great companies is the North East Satellite Applications Centre of Excellence supporting growth in the sector and opening doors to new opportunities.”

The Centre of Excellence, co-funded by the Satellite Applications Catapult and the UK Space Agency, and managed by Business Durham is hosting its annual space conference in Durham on March 22, where Shaun will be giving the presentation ‘unlocking space for everyone with tiny satellites.’

Prior to founding Scoutek, Shaun worked for 13 years at Leicester University’s Space Research Centre, where he was heavily involved in the engineering of Beagle 2, which landed on Mars as part of a European Space Agency mission in 2003.

He then worked at Astro Pioneer, before moving to Magna Parva, where he was instrumental in converting the small motorsport business into a successful player in the space industry.

Shaun then founded exploration technology firm Scoutek to work in the fields of space and archaeology. Ten years ago, he led the development of the Djedi robot, which explored the mysterious shafts of the Great Pyramid of Giza, in Egypt.