One of the region’s high-profile businessmen has been recognised after winning a coveted automotive award.

As well as recognition of Nifco’s leader, Alexander Park who is studying for an HNC in Mechatronics while working with the firm as a production engineer, was also a winner on the night, scooping the Graduate Apprentice Award.

The duo were among only eight winners on the evening, which took place at Sunderland’s Roker Hotel.

Mr Matthews said: “It’s a real honour to be recognised by my peers at these awards.

“The North East of England is home to a world class automotive sector, one which can compete – and does so – with any other region in the world, so it makes this award all the more special for me.

“Nifco has enjoyed a fantastic upward trajectory, as have many of our counterparts, and these awards are not only a celebration of the people and businesses making this happen, but of the fantastic cluster of advanced manufacturers that are helping to put the North East on the map as a thriving automotive hub.”

He added: “I’m also delighted that emerging talent at Nifco has been recognised.

“Myself and the senior leadership team at Nifco now, will not be at the helm forever, and we know that succession planning is absolutely critical to ensure that this industry continues to go from strength-to-strength into the future.

“That’s why people like Alex are at the heart of our business, and we will do all that we can to bring through the next generation of business leaders.”

The NEAA set up the awards to help shine a spotlight on the wider supply associated with the region’s OEMs.

The inaugural event helps celebrate the success of companies and individuals within the North East automotive sector.

Across the evening £16,000 was awarded in support of the region’s future talent, with Alex being one of four young achievers scooping £1,000 in prize money.

Alex, pictured below receiving his award on the night, said: “It’s a massive honour to have been recognised for my work at Nifco. 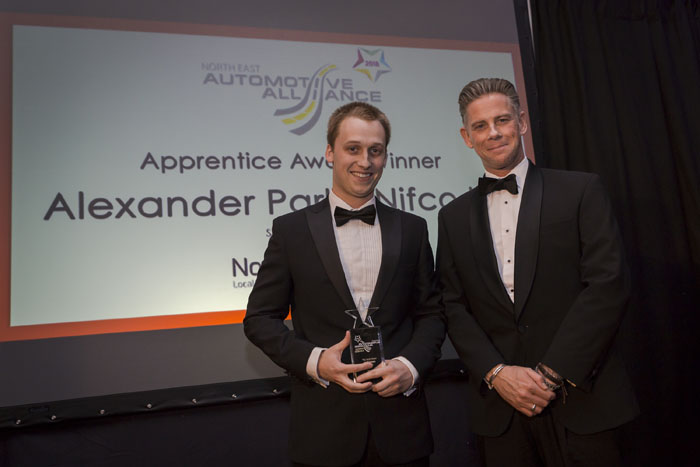 “Without my apprenticeship, I would not be where I am now. I was shy at school, didn’t understand how business worked and couldn’t see how education alone would take me to a career.”

Alex, 23, who comes from Darlington has been shortlisted for a number of awards, including the Plastics Industry Awards Apprentice of the Year award in 2015.

All other winners – including Mr Matthews – received a cheque for £2,000, which they donate to a local school in support of an automotive or STEM related project, which helps to raise awareness of the importance of STEM and the attractiveness of a career within the automotive sector.

The event was a sell-out with 300 guests coming together to celebrate the region’s success, as well as networking with big hitters from the North East and the wider UK automotive sector.