A masterplan to develop the historic Middlesbrough Railway Station into a destination fit for a city – and described as a “game changer” – has been unveiled.

The concept – which offers short term proposals and a longer term vision – includes the re-opening of the southern entrance, a stunning new glass frontage and concourse on Bridge Street, an additional platform, new commercial units, additional passenger facilities and improved access for sustainable modes of transport such as buses, taxis, cars and cycles.

All of the ongoing design work also aims to protect, enhance and complement the station’s Victorian heritage, beauty and splendour.

The proposals are the result of a commission – led by Middlesbrough Council with support from Network Rail, Tees Valley Combined Authority and the rail franchisees – to provide a long-term vision for the rail station and the surrounding area. 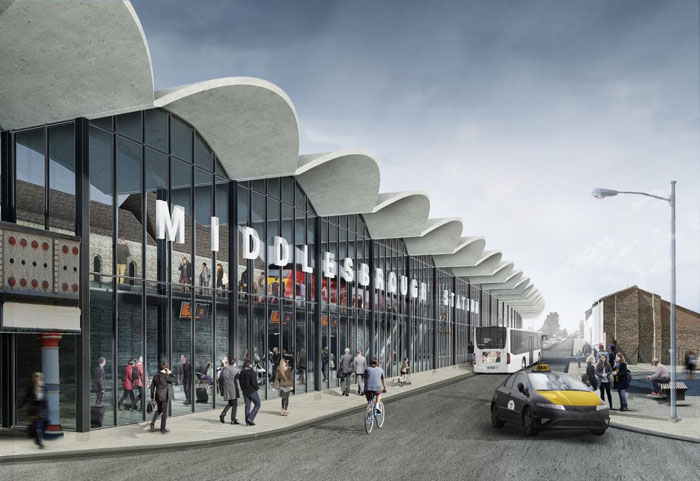 As a result of the commission, Middlesbrough Council and Middlesbrough MP Andy McDonald are working alongside the rail industry in the form of a joint programme board to realise both the site’s ambition and strategic potential over the coming years.

It will build upon work which is shortly to be complete in the form of Network Rail’s station renewals project that will see the completion of a 13 month, £3m project to repair the roof and stonework of the main station building.

Additionally, direct trains to London are due to begin from Middlesbrough in 2020.

Middlesbrough Mayor Dave Budd said: “Middlesbrough Railway Station is at the heart of our historic quarter and a central part of Middlesbrough Council’s investment plans to grow the local economy in line with our city scale ambitions.

“These proposals would make our iconic station even more attractive and also make better use of the space inside. Clearly, we are at an early stage, but it is wonderful to be able to make our ambitions public. The projects programme board will now begin action on how we can collaboratively work together to achieve this.”

Mr McDonald said: “The Consultants BDP have done some stunning visionary work that not only sees the station restored to its 19th century splendour including the southern Zetland Road elevation and the improved usage of the concourse and booking hall – much as the architect originally intended when the station as first designed- but transformationally presents a 21st century northern façade out onto Bridge Street that fits entirely with our European City aspirations and opens out into the emerging cityscape of Middlehaven. It’s an absolutely breathtakingly impressive proposal.

“What the entire proposal presents is a 21st century transport hub that is fit for purpose. This will be a game changer for Middlesbrough and the wider Tees Valley economy.

“So I heartily congratulate Middlesbrough Council, the Mayor Dave Budd his fellow Councillors and the superb officers who have driven this initiative forward and for the commitment that the Council has made to secure the achievements to date.”