Tees mayor Ben Houchen led business leaders from across the region in backing the Tees Business campaign of #TalkingUpTeesside during a major event at Middlesbrough FC’s Riverside Stadium this week.

Houchen spoke to 80 Tees business leaders at an event organised by Tees Business to mark three years of the Tees region’s business magazine Talking Up Teesside.

Click here to see our Video Interview with the mayor

The event, which marked the third birthday of Tees Business with the launch of the Spring 2018 issue, was attended by businesses from across Middlesbrough, Stockton, Redcar, Hartlepool and Darlington. 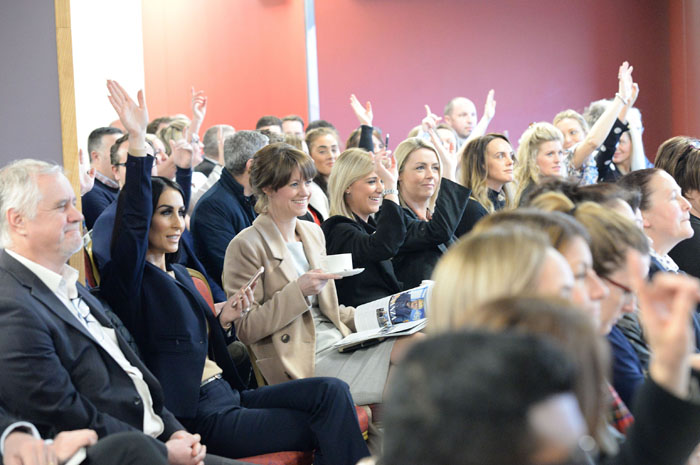 Asked by host Dave Allan why #TalkingUpTeesside was important, Houchen told the invited guests: “I’m very clear that I think too many of our leaders have made too much capital out of talking this area down. You won’t hear me talking negatively about our area.

“As individual businesses we need to talk more positively about what we do. The one line that comes out of every single business visit I make around the region is that we don’t really promote ourselves very well.

“That is a fundamental failure in terms of promoting not only our business but the area too – that we hide our light under a bushel about what we’re actually very good at.

“London, Bristol, Birmingham, Manchester, Frankfurt, Singapore, New York, Sydney or anywhere else aren’t going to stand up and say how good Tees Valley is. Why should they? We have to do that.”

Houchen said it was important the local business community took responsibility for shouting about their achievements.

“I’ve lived here all my life apart from a few years at university but until I started this job I didn’t know there is a business in the Tees Valley that has created the new nose cone for the NASA space shuttle.

“The same company is looking at defences for the international space station and a fuel injection system with Jaguar Land Rover.

“Other businesses do clean diesel engines that basically rival many of the hybrid cars that are then imported into London buses, while the centre for public transport control for the underground in New York is run by a Stockton firm.

“But I would suggest that at least 90% of the public on Teesside don’t even know that that’s going on.

“So we need promote internally on Teesside what’s going on here, then we can generate ambassadors to speak about it externally.”

The mayor added that he had just returned from a business trip to Hong Kong to promote the South Tees Development site to high-profile potential investors.

“We’re at top table and are starting to speak with international governments and businesses to say why the Tees Valley is a great place to invest.

“It’s all about the message being relentlessly positive.

“People want to be associated with good things and winners. Unless you’re promoting yourself as a good place to be and that you’re a winning business or region, people will look elsewhere, because it’s important we remember that we’re not just competing with down the road but internationally too.”

He added that would soon announce an Ambassadorial Scheme for Tees businesses.

“Watch this space for an opportunity to sign us as Tees Valley ambassadors,” he said.

“There will be obligations on businesses who want that watermark to include great things that Tees Valley businesses are doing in terms of promoting apprenticeships, employment and works experience.”