An ambitious new utility broker is already half way to creating 100 new jobs for Teesside with its big plans.

Entrepreneur Tony Anderson launched Splash Utilities towards the end of 2017 – choosing Middlesbrough over several other big cities – after he spotted an opportunity in what is already a booming industry.

An adopted Teessider – he moved to the region 20 years ago and currently lives in Hartlepool – Tony is originally from the Leeds and Bradford areas and has worked in outsourcing for several years.

His career has included six years in one of the business divisions of Serco, a global business process outsourcing company, and he has also managed high-profile accounts over the years including Sky.

His latest venture came about after the deregulation of the water industry last year – giving customers the freedom to switch, just as they can with their gas and electric suppliers.

“When the water deregulation came into force in April 2017, we saw a gap in the market,” says Tony, Splash’s managing director.

“An opportunity to provide three utilities to businesses – not just gas and electricity, but water as well. A multi-utility offering with improved discounts across the board.”

Splash was quickly born and the business moved into the 8,000 sq ft vacant premises in Royal Middlehaven House on Gosford Street in Middlesbrough last year.

And, after renovating the first floor space to an impressive standard, it’s already quickly becoming a busy hive of activity with 50 staff in place – but the recruitment drive is far from finished.

“We’re about half full, but it’ll be full by the end of the summer,” insists Tony. “That will include 100-plus front-line staff as well as back office personnel such as finance, HR, sales, admin, PR and marketing. 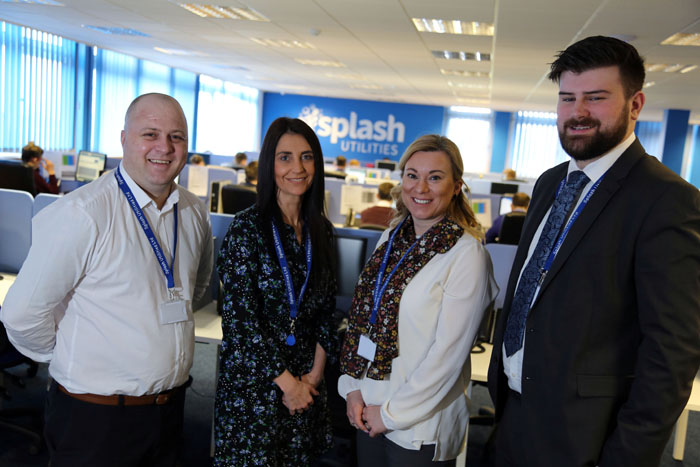 “This project will deliver significant numbers in itself, but we don’t want to grow too big too quickly. Of course, we’re ambitious, but we want to make sure first of all that we’re bringing value and a quality service to the market place. To do that, you need a real rigid structure within your business.”

Tony has revealed that he turned down opportunities in other big cities but eventually opted for Middlesbrough.

He explains: “We looked at Leeds, in fact we looked at a number of cities outside the Teesside area, in terms of where we were going to invest and kick-start this project.

“There were a couple of major factors in coming here. We knew the region had unemployment and we could see there was the chance of experienced people from other industries that had transferrable skills, which really attracted us.

“Another factor was Debbie Ingoldsby and the economic redevelopment team at Middlesbrough Council, who have been hugely supportive, and we also received a £350,000 grant from the SSI Task Force.

“All this support on the table really made it a no-brainer to put a foothold in the Tees Valley and create more than 100 new jobs and stimulate the local economy. That isn’t pie in the sky, it’s a real project and we’re creating jobs now.”

Tony adds: “I know some people can be sceptical about energy brokers, but serious savings can be made.

“There are a lot of small brokers out there, but we’re not fishing in that pond. We have direct relationships with suppliers and we don’t aggregate through any other broker. “We are basically a consultancy, where we offer businesses not just the chance to get better pricing but better services and an opportunity to access cutting-edge technology, including cloud monitoring of energy usage.

“The deregulation has motivated suppliers to look at reducing pricing and improving customer services, so ultimately that can only be a good thing for customers.”

“It’s about awareness but it’s also about investing back into the community,” says Tony. “That’s something we’re passionate about, we really want to build partnerships on Teesside.

“We’re going to be a major player in the Teesside business community, but we need to make sure we’re all working together to drive the region forward with its growth plans.”