When you’ve faced down enemies including ruthless Taliban insurgents and beaten a deadly form of cancer, you’re better equipped than most to deal with whatever challenges the world can throw your way.

Vastly experienced close protection and security expert Derek Laird, founder and managing director of Next Level Security Services, is committed to transforming the perception of his industry and introducing a whole new level of military standard professionalism.

The company has already taken enormous strides towards realising this ambitious goal and after a year one turnover of £300,000, is now on course to double last year’s figure of £4m to £8m in 2018.

But those impressive numbers tell only part of the story. In November 2015, just three months after he launched NLSS, Derek was struck down by a highly aggressive cancer that led to an eight-month stay in Middlesbrough’s James Cook University Hospital – and threatened not only his new business but his life itself.

“My wife is a former nurse and she thought I was having a heart attack,” Derek recalls. “I felt ill and was sweating a lot and looked pretty grey. I owe my life to her, as I would have just shrugged it off.”

Derek was suffering from Burkett’s lymphoma, a rare strain of Non-Hodgkin’s lymphoma affecting only about four people in the UK each year. He was told the disease is one of the fastest developing cancers and can kill in just 24 hours.

After lengthy treatment, he was finally given the all-clear and on June 1 2016, just two months after being discharged, he was back in business as one of the first tenants of Gloucester House in Church Road, Stockton.

“I immediately got back in touch with the contacts I’d made before becoming ill,” says Derek. “Before long we had our first contracts in place and within six months we won the main contract that changed the dynamics of the whole company.”

So why were clients prepared to wait so long after the initial approach to finally being able to engage his services? Derek believes they bought into his vision of a new kind of specialist security provided by a team of highly qualified mainly former military personnel.

“We take all the worry off their shoulders,” he explains. “We’re unique because we provide an all-encompassing strategic security service that includes logistics and planning.

“Our main focus is on larger companies in the onshore oil and gas industry, although we support clients from various sectors. Many are media-sensitive and can be subject to protests or actions. 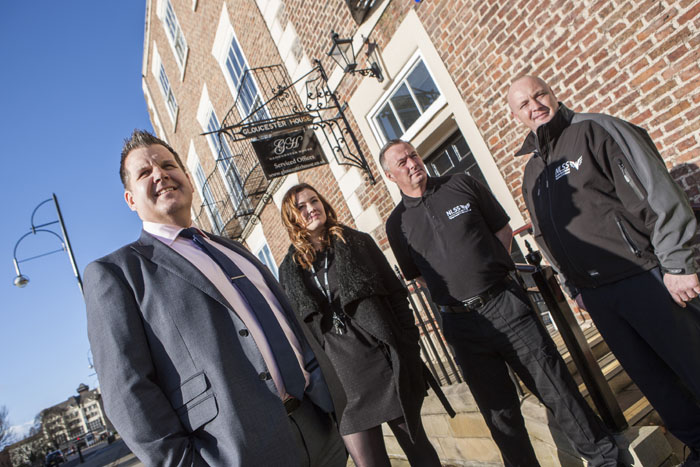 “We provide intelligence and assist with all strategic planning and movements of vehicles throughout the country. We utilise military planning, tracking vehicles and establish rendezvous points where drivers can go to in the event of an incident.

“We also hold daily meetings with police, liaising with senior officers to ensure policing and security are working together.”

Born near Stirling, Derek joined the Argyll and Sutherland Highlanders at 16 and became a senior NCO during 18 years with the regiment.

He spent the next nine years working in high risk and hostile environments including Afghanistan for the UK government, among others.

His duties included leading a 16-strong British Embassy close protection team in Kabul, where he earned a commendation for helping free a kidnapped British national, before he was seconded to protect the country’s highly targeted Attorney General.

On the wall in his office is a striking image showing troops in action in a combat zone, placed there as a reminder of his background and a tribute to fallen comrades.

“I lost a lot of friends and it’s something that’s close to my heart,” says Derek. “We’re signatories to the Armed Forces Covenant, a promise to treat those who have served and their families fairly.

“We’re keen to show our support for the military and to people who leave the forces as well. We welcome ex-military personnel to our staff. It can be a challenge to make the transition to civilian life, but there are so many transferable skills.

“We employ people who have served in all the forces, as well as many who aren’t ex-military but who are excellent at their job.

“Our planning is based on military planning techniques. It’s totally dynamic and we continually update and refresh the risk assessment and increase and decrease security as that risk changes.

“Our standard operating procedures drill down into the detail so that our staff know exactly what they’re doing and when. Sometimes in industry people use veiled language, but we like to be clear and concise in what we say.”

Derek has a raft of academic qualifications including a Bachelor of Science in Risk and Security Management and a Masters in International Security Studies and he is also a member of the prestigious Security Institute. Now 46, his mission is to give security a modern new image far from traditional stereotypes.

“We don’t do door work, pubs and clubs – there are enough companies doing that,” he says. “We’re more specialised and operate on a different level.”

April will mark two years in remission for Derek but he will never forget the experience of his hardest ever battle.

NLSS now employs 80 staff, with satellite offices in Malton and Stirling. Derek is the sole director and owner and has two non-executive directors, one in charge of close protection and the other responsible for business development in Europe, the Middle East and Africa. There are also two operations mangers in charge of their respective areas within the UK.

“My back-office team, Rosie and Olivia, are excellent at their job and make my life so much easier,” he adds. “The company wouldn’t be where it is without them.

“Adrian is our accountant and keeps the cash flow in the right direction. We have great support from our HR and health and safety representatives too.”

And although the business is building an enviable reputation on both the national and international stages with a third office in Scotland, headed up by Stewart who is expanding operations north of the border, Derek insists the company will never leave Stockton.

He said: “We have ambitions for the company to grow but this is an excellent location and we will always be based here.

“We could easily move our head office to London but I won’t do that. I’ve lived on Teesside for 16 years, my wife’s a Teesside lass and it’s a great place for us to be. Even though I’m Scottish, this is my home now.”

Find out more about Next Level Security Services at www.nlss.co.uk.