Mike Racz is no ordinary businessman.

The Hungarian moved to the UK 14 years ago, shortly after his country joined the EU, and eventually settled in Hartlepool, where he launched his first Domino’s franchise after working as a delivery man for the firm.

And he insists the expert legal guidance he has received from Stockton-based Endeavour Partnership has been crucial in him growing his firm over the last four years.

“I started working for Domino’s 14 years ago, making pizzas and delivering them, and I just loved it,” says Mike.

“I genuinely love the product, I think they’re the best pizzas you can get, and working for Domino’s gave me such a buzz.

“When you work at Domino’s time flies. It’s usually a young team of people in one store, full of energy, shouting and singing, it really is fantastic.

“I decided in 2005 that I wanted my own Domino’s, and about a year later I opened my first in Hartlepool, and we recently opened our 20th store.

“But as the group started to grow, and we needed more complex legal advice on property, leases and acquisitions, so we hired Endeavour and never looked back.”

Domino’s operates one of the largest franchise operations in the world, with 1,100 stores in the UK alone and 3,500 franchisees around the globe.

The Racz Group owns 20 from South Yorkshire and East Riding up to South Shields, as well as 13 Costa Coffee shops in the Lake District and Lancashire and nine Anytime Fitness franchises as well as the Black Olive restaurants in Hartlepool and Yarm. 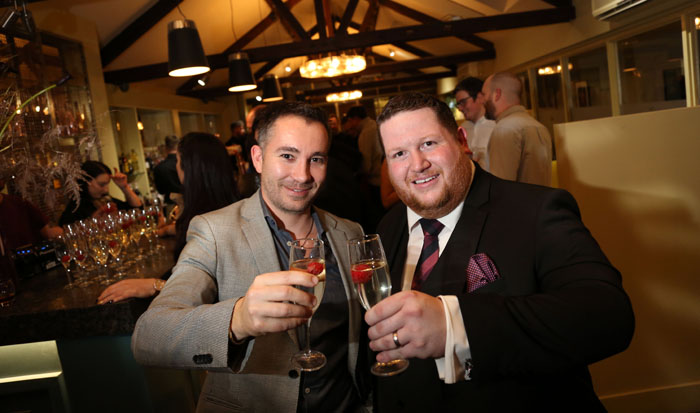 Mike, who is also an investor in Middlesbrough-based digital firms Viral Effect and Eighty8 Design, has plans to snap up more Domino’s as well as expanding internationally, with potential franchises in North Carolina in the USA and his native Hungary.

“I think I’m the only Hungarian Domino’s franchisee out of 3,500 in the world,” claims Mike. “Although I can’t say for definite, so I guess, why not open one there?

The Racz Group recently received the Domino’s Pizza Gold Franny Award by Domino’s, presented to storeowners ranking in the worldwide group’s top one per cent.

“They only give 35 away worldwide once a year, and we got our first one in Las Vegas in front of 10,000 people,” says Mike. “For us to be in the top one per cent in the world is a huge achievement – it’s our best, biggest and most proud reward to date.”

Mike first hired Endeavour Partnership four years ago and has been assisted by senior partner Nik Tunley and his corporate commercial team, looking after all of the group’s legal requirements including acquisitions, property support, lease work and various transactions for his property and franchise ventures.

Mike explains: “I had a bad perception of solicitors previously due to a bad experience. I felt that you paid because you had to – that it was a necessary evil.

“When the first Costa franchise came along it became quite a bit more complicated and I needed top-quality, experienced property solicitors to deal with it for me.

“Endeavour became very much an advisory consultant, almost an extension of the company, as opposed to simply offering a service.

“They’re genuinely always there for me. They really look after me and I’d like to think we’re friends.

“Good accountants and good solicitors are crucial for any successful, growing business.”

Solicitor Amie Leyden joined Endeavour’s team two-and-a-half years ago and is a multi-location franchise specialist, dealing in the property aspects of corporate transactions and franchising for clients with multi-location property portfolios.

Amie also specialises in supporting the corporate and commercial department on a variety of matters with an emphasis on company sales and acquisitions.

“It has been an exciting journey to see Mike’s company grow and help him along the way,” says Amie.

“The company has grown vastly in recent years and Mike has plans to expand even further, and facilitating that growth has involved a lot of complex legal work covering a variety of issues.”

As well as assisting with the group’s acquisitions, Endeavour has also helped Mike with relocating from Hartlepool to a new head office at Evolution Park, within Wynyard Park.

The Racz Group’s new HQ is now home to 35 senior staff, managing around 960 employees across its group, including 600 at its Domino’s stores, 200 within Costa Coffee and more than 100 in its gyms.

“There are huge opportunities here and across the North-East,” insists Mike.

“Out of the 35 senior staff we have in our head office, probably about 25 started out as a driver or instore worker. Our COO Laura Tarran started making pizzas with me aged 17, and her partner Stephen Winspear who started as a driver, is now our operations manager, responsible for more than 600 people.

“So there’s a vast amount of opportunities for anyone who wants to do it.”

Endeavour Partnership has a reputation spanning over 18 years in providing high quality advice on a range of business law matters including mergers and acquisitions, intellectual property, employment and pensions, business immigration, commercial property and corporate recovery and insolvency from its headquarters at Teesdale in Stockton.

The firm was again recognised as one of the North East’s top corporate and commercial practices in the prestigious Legal 500 and Chambers guides with every department highly ranked.

• Find out more about Endeavour and its legal services at endeavour.law

A family-run Tees butcher, which was launched three weeks before the first lockdown, has survived through sheer hard work and the use of social media. […]