Middlesbrough’s city centre regeneration has take another giant leap forward as the council agreed to sell parts of the Gresham area to make way for a modern student village.

Middlesbrough Council’s executive agreed to the disposal of land at a meeting this week, to allow Teesside University to create a modern 21st Century student village on the site.

A report, put before leading councillors and mayor Dave Budd at a special meeting on Wednesday, also recommend bringing forward housing development on the rest of the site in two phases.

The land included in the sale to the university would be an area behind The Crown public house bounded by Borough Road, Diamond Road and Garnet Street and the development would include the demolition of properties on Linthorpe Road to give a better connection to the main university campus.

Middlesbrough Council would receive £2m from the sale of the land.

In respect of the Housing Masterplan for the site, the report: “The proposals move away from the high density housing, which is typical to the area and provides better proportioned plots focused around private, semi-private and communal outdoor space. 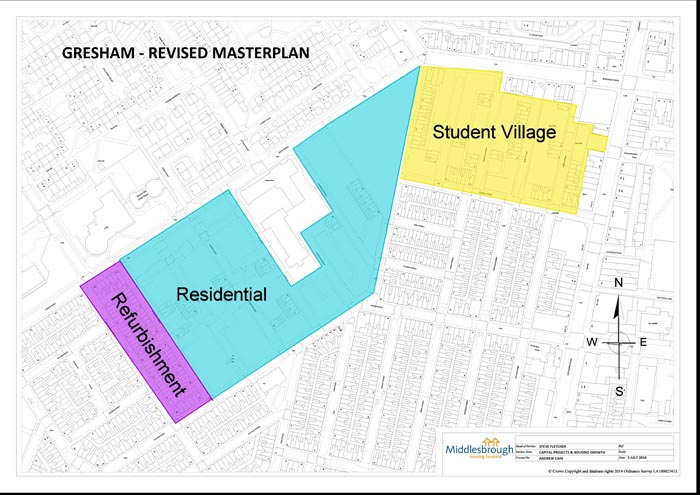 “The masterplan will integrate with the Student Village and embrace contemporary design and modern methods of construction.

“The design rationale for the emerging masterplan has focused on creating, and enhancing links to the city centre, Teesside University’s campus and the vibrant Linthorpe Road as this is deemed key to creating a sustainable, long lasting community in the area.

“The scheme will be ambitious and seek to provide a quality of development that will uplift the whole area.”

“In terms of the student village, the university has a strong track record of delivering high quality developments and you only have to wander around their campus to see how much care and attention to detail they put into these projects.

“Meanwhile the new housing offer will be very different from what has previously been on offer in the area – a balanced stock all of high quality which will help meet the needs of today and support both the growth of the population and economy.”

The latest update on the Compulsory Purchase Order on existing Gresham properties shows that there are only ten of 561 properties left to acquire and the report states that several owners have chosen to engage with the Council since the introduction of new relocation packages.

It is hoped that Heads of Terms can be agreed with the university by September this year and that development guidelines for new housing can be adopted in October with a view to building work beginning in January 2020 following necessary marketing and planning approvals.