A leading Teesside information technology company has renewed its shorts sponsorship deal with Middlesbrough FC as it continues to expand its growth and profile.

Boro released a fans’ favourite Hummel kit this summer which harks back to the club’s iconic Ayresome Park days and features a white chest band across the middle of the home shirt.

And Cornerstone Business Solutions will feature heavily on the Premier League promotion-chasers’ first team strip both home and away once again as they are sponsoring Boro’s shorts for the second season running.

Stockton firm Cornerstone’s logo will remain at the base on the back of Boro’s home and away shorts for the entire 2018-19 campaign while the club attempt to go up in manager Tony Pulis’ first full Championship season in charge.

Cornerstone were Boro’s first-ever shorts sponsors last season as they reached the Championship play-off semi-finals under Pulis, and the company’s managing director Chris Petty – pictured above (right) with Pulis and sales director Chris Bibby – is delighted to extend his deal with the club he has supported since he was a boy.

“We are all passionate Boro fans at Cornerstone and have a corporate box at the Riverside where we like to entertain our staff and clients,” he explained. 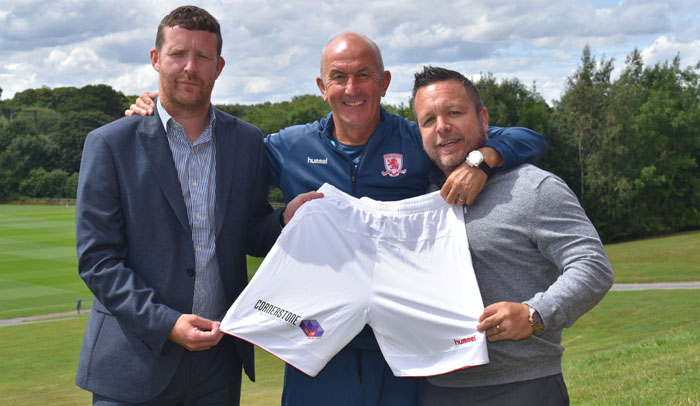 “It proved a massive success when we sponsored the first team’s shorts last season, and we were eager to get involved again this year for what is sure to be an exciting campaign.

“While we think of ourselves as Teesside’s leading IT company, we are still relatively small in real terms in that we have 25 staff.

“So it gives us a massive buzz to have Cornerstone branding on Boro’s kit.”

Petty said the renewed sponsorship package arrives at an ideal time for his firm – who have been Boro’s official IT partner since 2015 – as they look to increase their turnover while branching out into new areas.

Previous advertising at the Riverside Stadium has netted Cornerstone work with companies such as Virgin Media.

“It means we are raising our profile, not only on Teesside, but around the country and around the world,” he added.

“That fits with us perfectly at the moment, as we are looking to expand and increase our turnover from £2m to £5m, and we are soon to open new offices in Leeds, while Manchester is also a future target. Up the Boro!”

Rose Stoker, head of partnerships at Middlesbrough FC, said: “We are delighted to see Cornerstone appear on the back of the shorts for the second year, following a very successful 10-year partnership with the football club.

“Cornerstone is a local but very ambitious company and this will again give them the opportunity to expose the brand further. They will join 32Red and Ramsdens as the club’s kit sponsors.”