A “spectacular” new shopping arcade near the heart of a busy high street is edging closer to reality.

Although the site lies within a conservation area – and the development involves a Grade II-listed building as well as two other buildings of local interest – Mandale have carefully planned an application which is sympathetic towards the North Yorkshire town’s heritage.

The proposals for Regency Mews, in between the high street and Tesco, will rejuvenate several vacant retail shops and create modern new residential apartments.

And an alleyway which has been considered an eyesore by both the council and locals will also be vastly improved.

Mandale, who have been at the heart of a series of Grade A commercial property refurbishments across the North-East and beyond, plan to create a unique, continentalstyle arcade with a mix of retailers, coffee shops and bistros.

The Stockton-based firm’s property specialist Joe Darragh told Tees Business: “We see huge potential in this site and we think the new development will complement the existing buildings, while giving some of its rundown units a much-needed boost.”

Mandale have submitted a planning proposal to Hambleton District Council, and a planning and heritage statement has already given the thumbs up.

“Where the historic plot layouts exist, it will be beneficial to the character of the designated conservation area to both preserve and enhance their legibility through new development,” says the report. 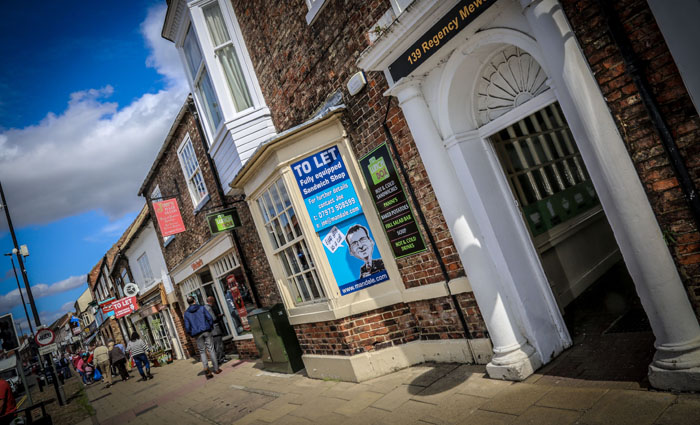 “It is clear the development proposals will accord with all of the relevant development plan policies, and there are no material considerations that indicate planning permission should be restricted.”

But Darragh added: “Northallerton has a won a reputation as a lovely place to live and visit, but last time I counted there were 12 shops vacant on the high street. Twenty years ago that was unheard of.

“Unfortunately, M&S and Morrisons are among those who’ve pulled out, but we’ve always been big fans of Northallerton and we’re keen to invest money into it and create a real feature.

“We feel the high street looks a little bit unloved at the moment, so the new shopping arcade would give it a real boost.

“It will be spectacular when it’s complete. We’re going to create something very special that we’re confident business owners, residents and visitors will all love.”

If planning permission is granted, it’s hoped the development will be completed by early 2019.

Last Wednesday it was confirmed Middlesbrough Council has been awarded £21.9m from the government’s Towns Fund. This is how mayor Andy Preston and the council […]