Claire Preston, the CEO of a Middlesbrough-based education business that has benefited more than 60,000 students across the UK, Middle East and United States, has been crowned the first-ever Tees Businesswoman of the Year.

Sound Training’s Claire was the headline winner at the inaugural Tees Businesswomen Awards, held at Wynyard Hall on Thursday evening (November 8) in association with Northern Skills Group, the training and apprenticeship arm of Middlesbrough College.

Middlesbrough-born Claire is the driving force behind a fast-growing business that was the brainchild of fellow director and founder, Katy Parkinson.

The firm’s unique Lexonik teaching programme enhances people’s education and life chances through improved literacy levels, and now has a turnover of around £1.5m, following international use in three US States and international schools in the Middle East along with much success across the UK.

Claire, who received her award from Professor Jane Turner of category sponsors Teesside University (pictured above), said: “Tees Businesswoman of the Year is an incredible accolade, and I just feel overwhelmed to win it. 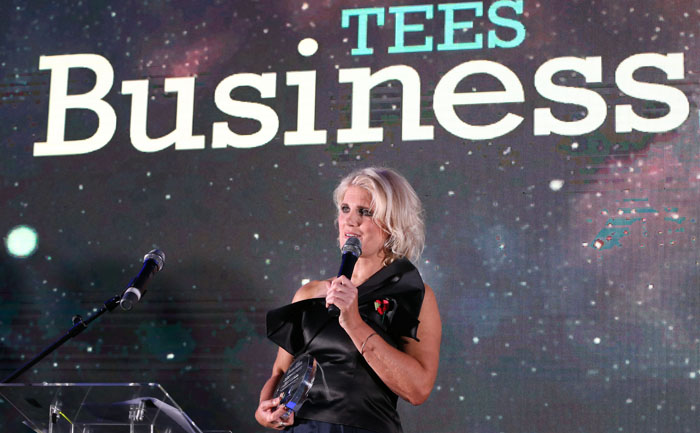 “But it’s not about me, it’s about the team and everybody’s hard work at our company.

“The future is going to be amazing for us. We are on a mission to raise literacy levels around the world.

“A realistic achievement for 2019 is to change the lives of thousands of people through improved literacy.

“And there is no way of measuring the impact that that is going to have on their lives and their standards of living and wellbeing.”

Hosted by Sky Sports anchor Hayley McQueen and attended by more than 270 people, the Tees Businesswomen Awards were organised by the region’s business magazine, Tees Business.

Another of the event’s major award-winners were J&B Recycling, winners of the Business of the Year, sponsored by Cornerstone Business Solutions.

J&B Recycling, who employ 200 staff across three sites in Hartlepool and Middlesbrough, are led by Vikki Jackson-Smith, who transformed her father’s solid fuel distribution company into a waste management and recycling specialist that now boasts a £16m turnover.

There was a standing ovation for another major winner, Anne Preston MBE of Prestons of Potto, who received the Lifelong Inspiration Award from Tees Valley Business Compass. The Road Haulage Association’s first female chair, Anne continues to run the family haulage company at the age of 81.

While she narrowly missed out being named the Businesswoman of the Year, Yasmin Khan was a double-winner. She received the Inspiring Others Award from SABIC, while The Halo Project – the Middlesbrough-based charity she leads – won the Charity/Voluntary Award from Venator in recognition of their work helping more than 1,000 girls and women fleeing from violence since gaining charitable status in 2014.

Developments by Joseph Homes presented the Breaking the Mould Award to SABIC’s Andrea Pearson, who recently returned to work from maternity leave as the senior engineer leading operations in preparation for a £60m plant overhaul in 2020. Andrea has also found time to sail across the Atlantic.

SME of the Year – chosen by Punch Robson Solicitors – was estate agent Hunters Teesside, while Nifco won the Training & Apprenticeships category in an award judged by px Group.

Promotional space is available in the Winter 201-8-19 issue of Tees Business, which will include a special supplement on the Tees Businesswomen Awards, and we’ve extended our booking deadline to 5pm on Friday 16th November.

Click here to see our Media Pack or email info@teesbusiness.co.uk to enquire.

The full roll call of winners and runners-up: