Psyche clothing store owner Steve Cochrane chatted with Prince Charles about his Middlesbrough hometown and the clothing industry – and posed with Hollywood royalty too – when he was made an MBE at Buckingham Palace on Friday.

Cochrane, who received the award in the Queen’s Birthday Honours for his services to the economy and regeneration in Middlesbrough, said he was “floating on air” after attending the palace with partner Alex and their 11-year-old son Ollie. 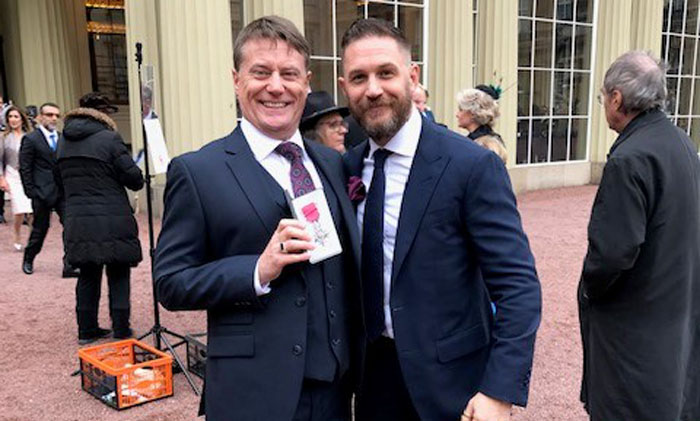 After opening his first store, Sliced Tomatoes, in Redcar, 36 years ago, Cochrane has established Psyche as a leading brand across Teesside and throughout the fashion business.

Along with the established Linthorpe Road store, there is Psyche 2 in the Cleveland Centre and a new store in Durham.

Reflecting on the awards ceremony, Cochrane said: “It was a room full of successful high achievers but everyone was nervous beforehand. I certainly was – and I really don’t get nervous.

“But I’m floating on air, to be quite honest. Everybody works hard but the fact that people have acknowledged my hard work is fantastic.

“To receive the honour for services to Middlesbrough and local economy is particularly special because I will always be passionate about promoting the town.

“Let’s face it, the national press like to kick Middlesbrough whenever they can but there are tonnes of positives about the place.

“We’re very self-effacing people, we don’t shout about ourselves as much as other places but I think that holds us back. We all need to become ambassadors for our town.

“Teesside needs a regional capital – and we have one. Middlesbrough is the epicentre of the Tees Valley, with the football club and businesses such as Cleveland Cable and Bulkhaul here.

“It’s a tough time for the high street because of the internet and changing consumer habits – and I think there’ll be a different landscape again by January, as more big brands fail.

“But I believe Middlesbrough is on the cusp of lurching forward. There are loads of good things happening including a snow centre, a student village and five-star office buildings in the centre of the town, all of which will improve local employment prospects.”

Asked what he discussed with the Prince of Wales, he said: “It’s amazing because I think there were 91 recipients and he remembered everyone and chatted to each of us about something relevant.

“He said ‘You’re the guy who bought an art deco building, refurbished it and turned it into a department store – Middlesbrough, wasn’t it? I said ‘Yes, that’s right’.

“He asked me how was trade in Middlesbrough and I answered that ‘Well, all retail is challenging at the moment but we’ve got to soldier on’.

“He said hopefully receiving something like this would inspire me to continue to push harder and progress even further. And it absolutely will.

“I’m proud of my life’s achievements but you have to pinch yourself on an occasion like that. I’m a lad from a street house in North Ormesby who has built a successful clothing business, so if I can do it, anyone can.

“We need to get more local people starting businesses. You have to work hard and long hours, of course, but because I love what I do it’s not like work.”

And he added: “I’ve got amazing staff, and a lot of them have been with me for more than 15 years. Without them being so hard-working and dedicated, Psyche wouldn’t be where it is and I wouldn’t be where I am, so this is for them as much as it is for me.”

Psyche launched an American website last Christmas, a New Zealand site hits the internet soon and will be followed by a Chinese version.

Among the honours Psyche has received are GQ magazine’s Best Menswear Shop and FHM’s Retailer of the Year, while it was runner-up to Harrods in the Department Store of the Year stakes.

More recently Psyche received the 2018 Drapers Award for Menswear Independent of the Year.