There has never been a more important time to move goods around the country by rail, alleviating the over-burdened UK road network and chronic HGV driver shortage while helping customers reduce carbon emissions and cut costs in their supply chains.

PD Ports is at the forefront of this agenda and in the last four years, since the launch of a £3m quayside rail terminal at Teesport, the port operator has become the leading rail hub in the north for European and global exporters and importers.

Considerable growth in container volumes year-on-year at Teesport was a catalyst in the decision made by PD Ports’ management team that led to the opening of a quayside rail terminal in November 2014.

Initial services ran on weekdays to and from Felixstowe and three days per week to and from Southampton. Demand grew rapidly and a direct link to Grangemouth and Mossend in Scotland followed less than 12 months later.

The overwhelming popularity of the Scottish connection led to the recent launch of a second service opening up further opportunities to connect global importers and exporters with the north of the UK.

The new service, operated by DB Cargo, runs five days a week from Teesport to PD Stirling Terminal at Mossend near Glasgow.

The timings of the service operate in direct connection with the P&O Ferries service calling daily at Teesport from Zeebrugge and Rotterdam; offering one of the fastest routes to Scotland from the continent for shippers, shipping lines and forwarders.

Teesport now offers more direct daily connections to and from Scotland than any other port in the north of England, running 10 trains a week and the potential to carry more than 30 containers per journey each way full with a variety of goods including food, drinks and furniture. 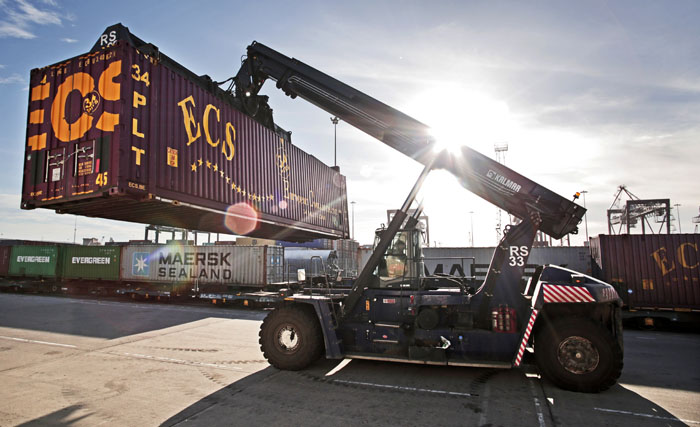 A substantial proportion of containers travelling on this service will be volume from the daily P&O Ferries service from Zeebrugge. Earlier this year P&O Ferries increased its capacity on this service by 25% in a response to market demand for Teesport as the port of choice to connect shippers with Scotland.

Rail is a tough nut to crack, with investment decisions taking years to materialise and often at a rate out of line with the demanding and unforgiving world of logistics where market requirements change daily. This was a bold move but a necessary one according to PD Ports CEO Frans Calje.

“Rail is crucial to moving freight around the country and its importance is increasing as customers look to move goods quicker, more cost-effectively and in an environmentally friendly way,” says Frans.

“One train fully loaded can take 30 HGVs off the road, and with the current HGV driver shortage in the UK standing at 45,000 drivers and set to increase once we leave the EU, it makes absolute sense to invest in and capitalise on all modes of transport available to us.

“Customers want assurance and choice. At Teesport we can offer that both through our own road transport fleet, port-side rail connections and extensive European sailing connections, which we pride ourselves on.

“Our second rail service to Scotland is a major milestone for Teesport and the wider Tees Valley. 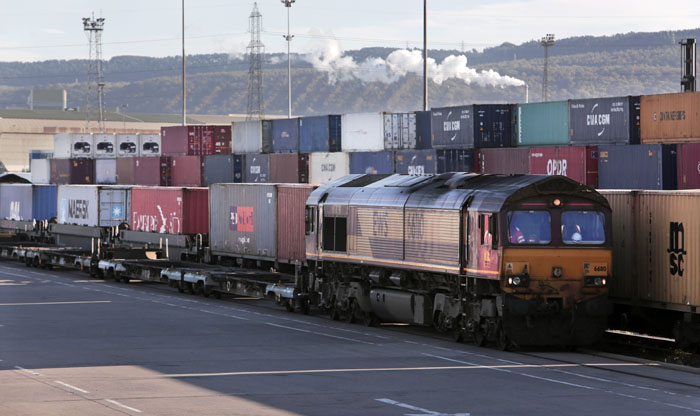 “It symbolises the tremendous sense of confidence and trust global shippers have in the port to deliver peace of mind, unlike other congested UK and European hub ports.

“Frequency and reliability is fundamental to the success of our customers’ existence. We have vessels arriving at Teesport from the Baltics every 30 hours and every 48 hours from Poland with direct rail connections from the quayside to Scotland twice a day, five days a week.

“This frequency breeds trust and confidence amongst shippers that they can transport their goods from Europe to Scotland within a 36-hour period, minimising cost and carbon emissions.”

Janette Bell, chief executive at P&O Ferries, says: “Our customers will benefit greatly from the increased connectivity which this second rail link to Scotland will give Teesport. In tandem with our highly costefficient 15-hour sailings to the continent, we can guarantee both exporters and importers an unrivalled service to and from northern Britain.”

Andrew Stirling, managing director at PD Stirling, comments: “This is excellent news for Scottish importers and exporters. It not only provides vital daily rail connections to and from the continent through Teesport, it also provides support to Scotland’s manufacturing base.

“This growth in rail transport with Teesport has led to firm plans to expand our facilities and to launch the Mossend International Rail Freight Park.”

Tees Valley mayor Ben Houchen adds: “Strong transport links are essential for a strong economy and this new service is fantastic news for PD Ports and the whole of Tees Valley.

“Teesport is one of the deepest water ports on the East Coast of England and its facilities connect our industries to the world.

“It’s already an attractive prospect and an invaluable resource which has been made even better by this announcement, especially in ensuring we’re an outward-looking, global region able to take advantage of all the opportunities of Brexit.”

David Coppock, North-East region director for Northern Powerhouse, Department for International Trade, adds: “This new service is further proof of how significant and important Teesport is to the Tees Valley in expanding its global reach.

“PD Ports is providing further vital investment in the region by opening up frequent, efficient and flexible transport routes for international trade.”

The second service into Scotland is a clear demonstration of PD Ports’ continued commitment to developing a truly multimodal logistics platform at Teesport with the ability to support future growth in international trade and the delivery of government plans to rebalance trade through the Northern Powerhouse.

Teesport continues to see considerable growth year-on-year in container handling and saw an overall volume increase higher than any other UK port in 2017.