Two Teesside businessmen have launched ambitious plans to bring professional sport to the area with the announcement of significant investment into the Teesside Lions Basketball Club.

Teesside Lions, formerly known as Middlesbrough Lions, was a National League club attracting crowds of 500+ at Eston Sports Academy between 2010 and 2013 and after a five-year absence from the National League scene the team are set to return in the 2019/20 season.

James Thomson, chairman and head coach of the club, has welcomed local businessmen Martin Anderson as more than just a sponsor in what he described as one of the most important ‘signings’ in the club’s history.

Mr Thomson, who will remain owner and continue his role as figurehead of the club and Head Coach of the senior side, said: “This marks a momentous occasion in what will be the foundation for setting up something very big for the area.

“People who know me, know how ambitious I am and what we have achieved in the past with a relatively modest budget.

“With the support of Martin and others we will set out our plans over the coming weeks and months. We aim to gift the people of the Tees Valley with a dynamic and entertaining sports team to complement the likes of Middlesbrough FC in promoting the area and bringing joy to people.”

Vitally the club will now have the resources and support to develop in a much more professional way and at a much quicker pace, with Martin investing his own money and also dedicating expertise and time.

Martin, 39, from Stockton, is managing director of Lemon Business Solutions, a call management centre based at Preston Farm Industrial estate in Stockton which employs more than 70 staff.

“My vision is to host high level spectator orientated events on Teesside and position Lions Basketball firmly on the UK map,” said Martin.

The pair’s combined expertise of sport and business make for exciting potential. 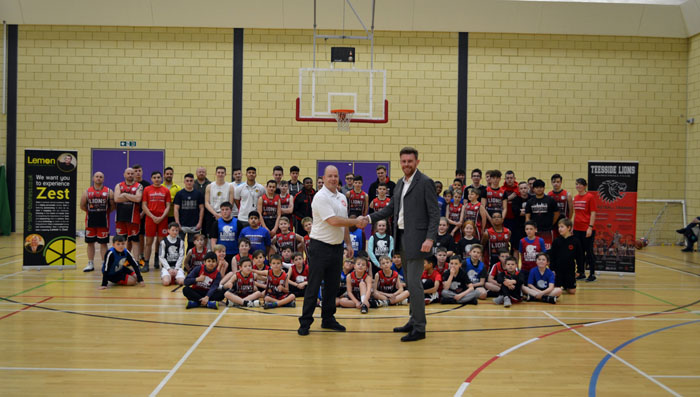 They are also keen to stress their commitment to the community and are currently finalising a five-year plan along with a Community Development Master Plan that will provide access to training for all ages and abilities across the area.

The club currently attract more than 160 players to six sessions per week. An impressive 80 players take part in the Thursday community session alone.

James added: “Everyone is aware of the sense of excitement when the Boro are doing well or when Glen Durrant won the BDO World Darts Trophy.

“The area benefits from an aura of optimism and this emits a positive factor that can enhance the mood of people.

“We want Teesside Lions to play a part in the Tees Valley success story and promote positivity in and around the area.”

Over the coming weeks and months the pair will be announcing some key developments to aid their five-year plan and vision for the club and welcome any feedback from the community.

If you would like further information on Teesside Lions basketball and their activities around the area visit www.TeessideLions.com or contact the club via info@TeessideLions.com

You can also keep updated with events via Teesside Lions Basketball on social media.

Pest control is a subject that no one likes discussing until they are in need, but the unsettling fact is that there will always be […]

Paul Davison, commercial director at Stockton-based Erimus Insurance Brokers, asks some pertinent questions about your insurance… As we inch our way closer to the easing […]