A contractor has been appointed to take TeesAMP Advanced Manufacturing Park in Middlesbrough from blueprint to reality.

Robertson North East has been commissioned to construct phase one of the development and the first units will be ready for occupation in December.

To add to the great news local firm Nationwide Structures, based in Stockton, has been appointed as steel fabricator and around 90% of the 750 tonnes of steel will come from British Steel at Redcar.

Geoff Hogg of Cleveland Property Investments, who is working with Middlesbrough Council and Tees Valley Combined Authority (TVCA) to bring the £55m park to life, said: “It is fantastic that all the work that has been going on in the background since Business Secretary Greg Clark visited in September has paid off.

“We are in talks with a number of companies who are interested in moving to TeesAMP – bringing high-quality advanced manufacturing jobs with them – and that’s what it’s all about.”

“TeesAMP will bring long-lasting benefits in terms of jobs, skills, prosperity and further investment – and the appointment of a local steel contractor is just the latest boost to the local economy.”

“I’m delighted that some of our brilliant Tees Valley businesses are being drafted in to provide their services, demonstrating how our investment is already working for the good of the region.”

Phase one will include 180,000 sq ft of high quality manufacturing and office accommodation across 14 units.

Robertson, one of the largest independently owned construction companies in the UK, has its North East headquarters in Gateshead.

Elliot Robertson, chief operating officer of Robertson Group, said: “The Tees Valley has an ambitious modern industrial strategy, and we are delighted to be part of such a crucial step in what is a nationally significant project. 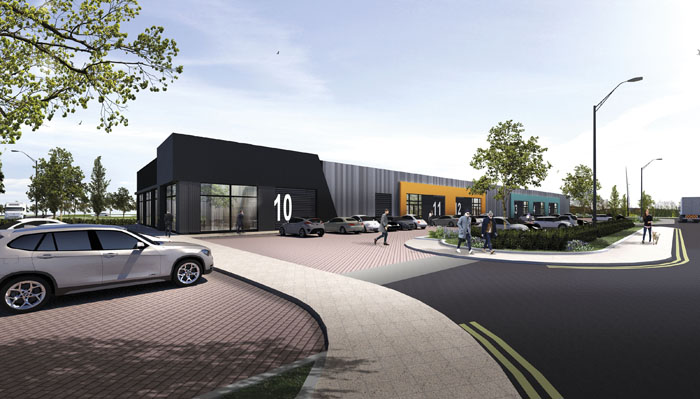 “The jobs and investment TeesAMP will provide will deliver long-term prosperity for the region for generations to come.”

Andy Dagnall, regional manager of Nationwide Structures said: “This contract is worth £1.3m to us.

“We aim to use as much local steel as possible – around 90 percent will come from British Steel in Redcar. I think that’s about as local as you can get.

“Sourcing local materials is a huge benefit to industry in the area and we’re delighted to have been appointed.”