Innovation and expertise in the energy and recycling fields at Wilton International could be the key to future-proofing Teesside’s economy.

So heard a meeting of some of the biggest business names on Teesside who gathered recently to hear from an expert panel on the region’s business outlook.

Amongst them at the exclusive Tees Business event was Daren Smith, site director at petrochemicals giant SABIC which employs more than 600 people on the Wilton site.

The firm has the capability and the technology to develop its reach even further, Mr Smith told more than 100 delegates at the Talking Up Teesside event – particularly when it comes to potentials in plastic re-use and harnessing the power of hydrogen.

The Wilton site was once home to chemical giant ICI. Since the brand disappeared, the 2,000-acre site south of the Tees has cemented itself as one of the leading UK centres in process industry manufacturing.

Home to firms in a range of sectors from petrochemicals to plastics, energy, biofuels, automotive and advanced manufacturing, the huge site is powered by utilities provider SembCorp whose expansion plans for a new 1.7GW gas fired power station have just been given Government approval.

SABIC acquired plants at Wilton in 2006, its operations include manufacturing chemicals that are the building blocks for a range of products from plastics to pharmaceuticals via the Olefins 6 ‘Cracker’ plant.

“We service the needs of society,” Mr Smith told delegates at the event.

“But what do we do with plastic once we are finished with it? Phenomenal technology is developing, and ready, to take plastics and convert them back into the chemicals used to create the building blocks to make them in the first place. 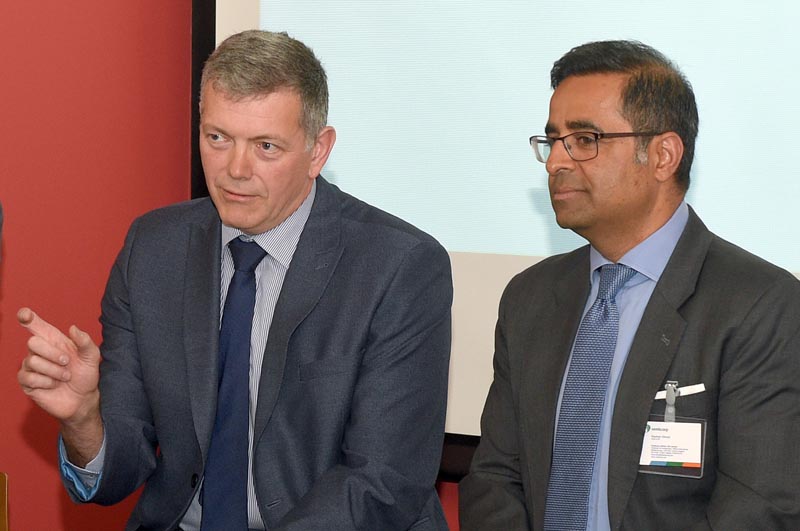 “Let’s talk about the Teesside region being the base to re-process that plastic. We have a world class cracking facility to convert that plastic back into being reused, that’s the paradigm.

“But there are other products that come from chemical processing. CO2, for example, there are very positive things you can do with that.

“We are a large generator of hydrogen. At the moment it is used as fuel into the furnaces but there is nothing to stop us taking that fuel and using it to power trains or transport systems in the near future.

“It is good for society, good for the plant and it also makes good business sense.

“The technology is there. Put all that together and what we are all hopeful about is that it drives industry to invest in putting projects in to Teesside.

“This is about the technology of the future. My cup is more than half full. I’m really excited about what we can do on Teesside. We have companies for hire, we have a wealth of talent ready to mobilise to bring these things to fruition.”

Tees Valley mayor Ben Houchen also spoke at the event. Clean energy is one of his key interests and he is keen to show Government that Teesside can provide the answer to meeting the UK’s targets when it comes to renewable energy.

“We have been processing chemicals here for the last 100 years,” said Mr Houchen.

“This is about future proofing it for the next century.”