When Laura Tarran was almost 16, she was walking down York Road in Hartlepool on the way to a friend’s house when she spotted a “staff wanted” ad in the window of a soon to be opened Domino’s Pizza store.

Her mum had just told her she needed to think about getting a part-time job to run alongside her college studies and with that ringing in her ears, she went inside and left her details.

The Domino’s franchise belonged to Mike Racz and the year was 2006. She got an interview, got the job – and the pair are still working together more than a decade later. Only the business is on a much, much bigger scale.

Racz Group also has investments in Middlesbrough in digital multi-media company Viral Effect and employs almost 1,000 people with an annual turnover in excess of £30m.

The group is one of the UK’s largest owners of franchised businesses and has a vision to become the largest company based in the North East of England by turnover and number of team members.

As its chief operating officer, Laura is involved in running and managing all aspects of the business on a day-to-day basis. She can be working through the logistics of opening up a brand-new site one day to team training the next.

But she’s never forgotten how to make a great pizza and that, she reckons, is just one of the reasons why the group has gone from strength to strength.

Staff on the ground know the management team have been there and done that, so to speak. There’s a real family orientated philosophy and a willingness to pull together and be the best team.

“It is a family organisation, it doesn’t matter who you are or your size, there’s a sense of belonging to the group,” says Laura.

“The North East is our home and base for our business. This is where our key teams operate from and how we support our businesses around the country. Any new business opportunities are trialled and tested from here in Teesside.

“All of my team know I’m here; they know where to find me if they need me. We might be working with different companies, different brands in different parts of the country but they are essentially all run the same way with the same core ideology. We know how to run businesses and that model applies to any type of business.”

She carried on working at Domino’s for Mike through her A Levels and university studies but the group was growing rapidly and she threw herself into working full-time.

“University was kind of the expected thing you did, I went on to uni after A Levels but I was always more interested in how businesses were run and what made them successful,” she says. 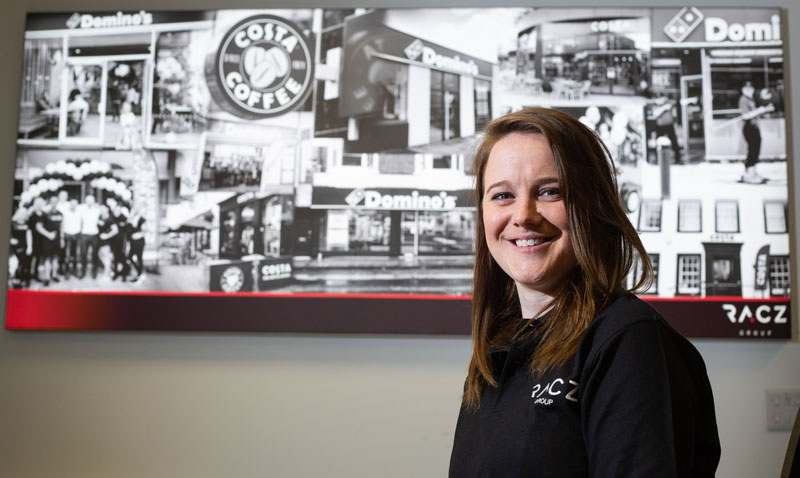 “I much preferred working at Domino’s, for Mike, by then he had seven stores and I had fallen in love with it!

“I started off making pizzas in 2006, memorising pizza patterns and topping codes – once you learn it you never forget. I go into the stores now and I can still make a pizza and I still like to think I’m really good at it, not so great at making a flat white though!

“When it comes to company values, if you criticise you have to be willing to offer a solution, so basically it’s not a no, it’s how do we do it? Being led by Mike always helps, his passion and energy is as strong now as it was 14 years ago.”

Her proudest moment at Racz Group came last year when the company was presented with a “Golden Franny” award by Domino’s Pizza International at an awards ceremony in Las Vegas. “Domino’s franchises from all over the world were invited and to know that Racz Group was acknowledged as one of the best was one of my proudest moments in the business,” says Laura.

She enjoys visiting the stores and getting stuck in. She wears the same uniform the staff do – “I don’t have a management uniform in my wardrobe!” – and has learned every aspect of the business from the ground up.

She admits she probably hasn’t switched her phone off in the past eight years but that’s kind of the way she likes it. “My mum always taught me that you work hard for what you want, admirably my mum worked very hard from nothing to be the successful woman she is today.”

When she’s not at work she’s mum to Harry, eight, and a carer to Shelby aged 17.

She thrives on the busy lifestyle – although she does admit she keeps the family rota on an Excel spreadsheet and sticks it to the fridge every week so everyone is kept right. Her one little escape is a horse called Murphy, which she loves riding along the beach.

So what’s next for the company?

“Mike is always moving the goal posts – he says there’s no end goal, the sky is the limit,” she smiles.

“We are aiming to open more Domino’s, Costa is growing, and we are always looking for the next new thing.

“There isn’t anything my team can’t do, with Mike’s ambition, the team’s desire to be the best. My main job is to keep them focused, interested and keep the spirit of Racz Group glowing. For me personally, the aim is to keep learning new business elements and expand on my already brilliant team.”

A clear identity and awareness are crucial to help the Tees region’s digital sector continue to thrive and strive towards being a national leader, say […]