One floor in a Teesside office building, 10 staff and a vision – that’s how Endeavour Partnership started out 20 years ago.

Two decades later that vision to provide the best commercial legal solutions for their clients remains exactly the same, but things are on a much bigger scale.

‘Business, taken personally’ is the mantra of the Teesdale Business Park-based firm which, as its 20th anniversary approaches, has announced a brand-new management structure to take the company forward.

The Teesside University graduate has been with the company for 17 years and takes the reins from retiring head and founding partner Paul Bury.

He’s joined by a management team consisting of five other partners who all have a stake in the business and their own responsibilities within it.

The new structure is a major change for Endeavour and one which the team is very much relishing.

“Twenty years ago, four partners started the firm and Paul Bury, the last of the founding four, has retired, which is the main reason for the change in structure,” says Lee.

“You could say it is a handing over of the reins to a younger generation, a new team ready to lead us forward in to the next 20 years.”

Put the six all together in a room and fire questions at them and what comes across is just how committed they are to the area they serve and how passionate they are about the job they do.

Business law is their forte and the expertise across the partnership is dedicated to serving all sectors of enterprise across the Tees Valley.

Endeavour Partnership acts for a number of Teesside’s best-known regional brands as well as for multinational clients based in the UK and beyond.

It has grown steadily over the past two decades and goes into the next phase of its history with nearly 60 staff in a dedicated office building, Tobias House in St Mark’s Court down by the side of the Tees close to Durham University’s Stockton Campus and Stockton Riverside College.

The partners have roots in the region, most of them born and bred here in our corner of the North East. 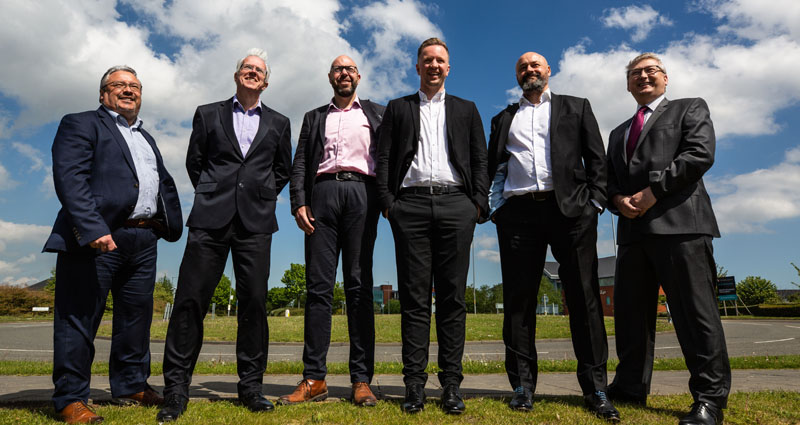 Culturally, Teesside is where Endeavour’s heart is and where the company has decided to remain.

“We are very much Teesside based,” says Simon.

“We are very much focused on the Tees Valley – most of us if not born here are Teesside bred.

“There is plenty of business on Teesside, our core business is serving business clients and culturally, that’s where we are.”

Twenty years ago, the aim was to establish a “city quality” law firm in the Tees Valley to rival the best regional firms, then all based in either Leeds or Newcastle.

Endeavour Partnership’s focus was to deliver top-quality legal services and it quickly established a reputation for being innovative and modern.

It’s “human” and approachable side is what sets it apart and that’s evident within a few moments of talking to the partners.

There’s no doubt these are uncertain times in the political world as the landscape changes and the UK’s position in Europe is the subject of more than a little confusion.

The B-word – Brexit, of course – is the one on everyone’s lips and the team at Endeavour Partnership are well versed with its implications for business in the region and beyond.

The message they are receiving from businesses is the desire to just get on with an “in or out” decision so there is at least some clear direction to move forward.

“There is uncertainty, but we haven’t seen any noticeable downturn in terms of work,” he says.

Politics aside, says managing partner Lee, the landscape of the Tees Valley is in a good position with a positive vibe and leading voices dedicated to putting our area on the map.

“Businesses just want to know are we in or are we out and then act accordingly.”

“As we grow, we very much want to be able to support the local economy and local skills, that’s important to us,” says Lee, who joined Endeavour in 2002 having completed his Law degree at Teesside University. He established the firm’s corporate recovery team in 2012 and was recently appointed as chair of trustees of Middlesbrough and Teesside Philanthropic Foundation.

“We are very much hoping to expand our work across all sectors.

“Without sounding cheesy, we’d like to be able to leave a legacy. A firm that has been going for many years, regarded for its strength and depth, with a reputation in the Tees Valley that makes us one of the established names immediately associated with the area.”

Hartlepool Sixth Form has appointed an industry specialist to lead its new engineering and technical curriculum. And college leaders believe the appointment of Jeff Bower […]

A new foundation will safeguard Teesside International Airport for future generations, says Tees Valley mayor Ben Houchen. In the future, before the airport could be […]