So-called because “it takes very little attention once it has been potted and planted”, Baxter Personnel managing director Andrew Harrow explains, Cactus is designed to dramatically reduce the time and money companies spend on permanent recruitment.

Andrew believes Cactus puts Baxter Personnel at the cutting edge of technology and gives them a unique advantage in the national online recruitment marketplace.

Companies looking to fill permanent job vacancies pay a flat fee of £249 to use Baxter Personnel’s in-house designed, developed and patented recruitment tool, posting job adverts, and the system then recruits on their behalf.

It proactively searches CV databases, such as LinkedIn and Totaljobs, its own national database and all the social channels and pinpoints and approaches prospective candidates via email, WhatsApp, SMS or Facebook Messenger to see if they are interested in a particular role.

If they are, a digital registration is completed before a screening interview takes place online. Once passed, an interview date and time is scheduled.

Baxter Personnel launched Cactus in April and MD Andrew is delighted with the finished product.

“AI and automation in recruitment is massive in the United States, whereas the UK is generally a bit behind in this sort of thing, although we are catching up all the time,” Andrew explains.

“We are really excited with what we offer with Cactus. I hate to use the phrase ‘disruptive technology’, but we genuinely cannot find anyone else in the UK doing it to the same level of automation as we are.

“In terms of going out and finding passive candidates online, looking at job boards and LinkedIn, I look around regularly and can’t see anyone else going as far as or to the same level we are.

“There are people who say they autofilter applications, but that’s not new, document management software can do that.

“But going out and proactively approaching people who are not necessarily active in a job search – passive candidates – is an area we have been trying to tap into for years. 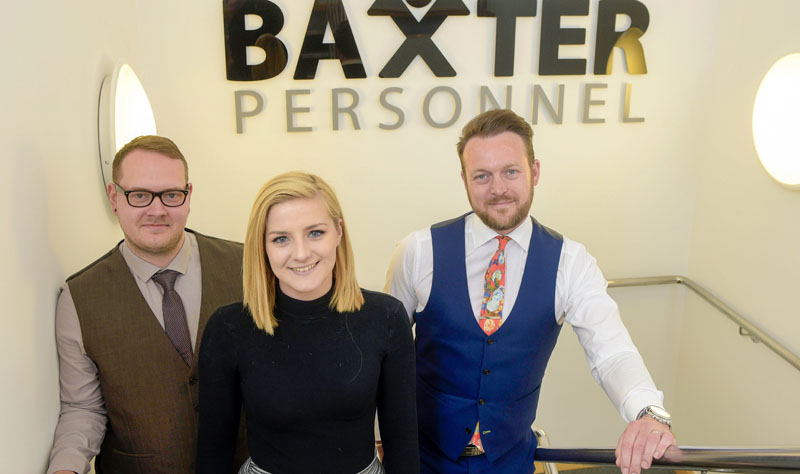 “The problem that the industry has had for a long time is that you don’t have every CV in the country – you are relying on people applying for jobs.

“A big part of Cactus and where you are really winning with it is that 80% of people who end up getting jobs are out of the passive market, rather than people applying for jobs.”

Andrew says that there are countless benefits of Cactus, both for his firm and customers.

He explains: “This system makes our business a lot more productive and efficient, because we don’t have that dead time with ringing people and them not ringing back, and all of the management that goes into it.

“It takes the system less than 10 seconds to arrange an interview. We have turned ourselves into a 24/7 business without increasing any heads or hours, and Cactus is the full package for our clients.

“Commercially, the clients who are buying the product for a one-off £249 fee instead of something they were paying between £2,000-£4,000 for before think it’s the best thing since sliced bread.

“For example, we had local clients in County Durham who were looking for a site manager, and literally overnight Cactus found them five people with the experience that they wanted.

“They were absolutely over the moon with it.”

“It’s a very brave thing to do because it is completely overhauling the way our business was run and built in terms of fees,” he says.

Andrew explains that Cactus was designed to complement Baxter Personnel’s current and ongoing temporary and RPO models, while breaking the boundaries of permanent recruitment.

“It’s changed our product offering completely, we believe in Cactus so much that we don’t charge contingency fees any more, and as a business you have got to keep up with the times,” he adds.

“Cactus offers clients looking to fill permanent vacancies a new, cheaper and easy to use solution.

“Not only are we keeping up with the times, we believe we are ahead of them and that our algorithms are groundbreaking.”

Since its launch, Andrew is pleased with initial client take-up and response.

“It’s way ahead of where we wanted it to be at the moment,” he says.

“We’ve dealt with numerous companies we’ve never dealt with before, and people are asking if it’s too good to be true.

“We’ve got a lot of testimonials from companies like Aldi and Harrington’s Pet Food who are very happy with it.”

Cactus is designed and marketed by what Andrew describes as a “dream team” of senior software engineer Matthew Stott, a Teesside University graduate in web development, and marketing officer Katherine Sykes, who has a Masters in marketing from the University of Sunderland.

“Without them none of it would be possible,” he says. “Their skills are ridiculous.”

Find out more about Baxter Personnel, and its Cactus online tool, at cactus.baxterpersonnel.co.uk

Twelve gongs will be handed out at Monday evening’s fourth annual Tees Businesswomen Awards greats – with one of either Vikki Jackson-Smith, Zoe Lewis and Chloe Clover set to be crowned Tees Businesswoman of the Year.

Hundreds of delegates and exhibitors – including Tees Business publisher Resolution Media and Publishing – will attend an event showcasing some of the best local businesses.

Despite setbacks faced by the travel industry in the wake of Covid, Stockton-based Dawson & Sanderson has seen a renewed interest in both corporate and lesiure travel and is cheerful and optimistic about the future.