There’s a vision at Racz Group and to the man in charge, it is a straightforward one.

The company, which operates from a HQ at Wynyard Business Park, aims to become the largest company in the North East of England in terms of turnover and number of team members.

Any businessman operating in any climate in any economy around the world will tell you that commerce has a handy way of throwing up obstacles, especially when you might least expect it.

But the way Mike Racz sees it is as straightforward as the Racz Group’s vision.

Challenges are part and parcel of life and there are no limits when it comes to the drive, energy and determination to tackle them.

His company is already one of the UK’s largest owners of franchised businesses in the UK. Racz Group runs 28 Domino’s pizza shop franchises across the North East and beyond – soon to be 29 with the opening of a planned new Middlesbrough store.

Employees number at around 1,000 with a core management team running the operation from Wynyard.

Mike has come a long way since leaving his native Hungary and starting out with just one branch of Domino’s in Hartlepool at the age of 24, 14 years ago. He had a work ethic then and he still has a work ethic now along with the ability to recognise potential in people – and places.

“At my interview to become a Domino’s franchisee, they said whereabouts would you like to go? I didn’t care at that time, I said wherever I could have the opportunity to expand,” says Mike.

“They offered Rochdale or Hartlepool. I initially wanted Rochdale, I thought it was bigger. But then I chose Hartlepool.

“A lot of my motivation came from being an underdog, not necessarily to prove people wrong.

“I was always the one being told ‘you won’t succeed’ but out of 6,000 people who applied in the same year as me, only eight were selected.

“I wanted to try the North East. There is so much potential here. We are more approachable, we are more easy going. 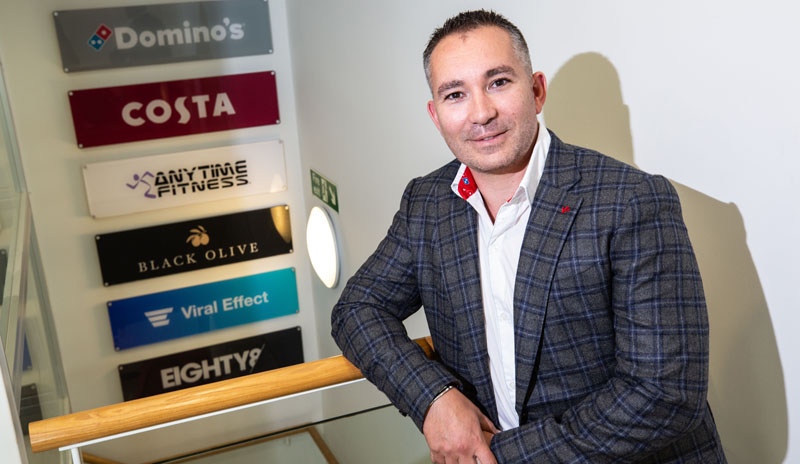 “People would say ‘what’s in the North East, what do they have there?’ But the question is really what don’t we have?”

The company’s turnover is forecast to reach £32m at the year end but Mike isn’t one for too much emphasis on numbers.

He doesn’t believe they should define a business – or limit it – and that’s partly the key to his success.

The Domino’s arm of the business was up and running when he decided to extend it and include Costa. He knew the brand and loved it so the decision was simple. Ditto Anytime Fitness.

“Taking over the Costa franchises was quite simply a business decision,” says Mike.

“I don’t think I could be passionate about computer equipment say, or pancakes. I’ve got to love the brand. I love coffee, it was a natural fit.

“It was still a business decision though, not much emotion came in to it.”

But why the franchise model?

For Racz Group, it fits. They know how to run businesses and they run them well.

“You have full control with a franchise model,” he explains.

“When you start out you are more or less given a manual and you follow it, why would you fail? You follow a set of rules. Although, of course, external factors do come in to play.

“We are one of the strongest groups in the country now.”

Success is never a given but Mike is never one to give up. Surrounding himself with a management team that share his ‘anything is possible’ attitude has also been key to driving the business forward.

Out of the senior staff at team Racz, many started out at as drivers or in-store workers with healthy doses of drive and determination.

He has such confidence in the team that, he smiles, he owns at least 10 businesses that he’s never set foot in – including a franchise in Truro, Cornwall. He doesn’t have to, the i’s are dotted and the t’s are crossed by experts he has every faith in.

The past few months have been incredibly busy. Four months ago Mike completed a major finance restructure at the same time as buying out a business partner in a number of franchises as well as opening new ones.

So what’s coming next?

New paths are always under consideration but their direction is something Mike has to be invested in.

“But it would be something where I am already a customer. I want to expand but I don’t just want to do it for the money side of things.

“I want Racz Group to be the largest in the North East.

“Our headquarters will always be here but we’ve already expanded into other parts of the country with many franchises – the likes of Truro and Kensington to name just a few. I’ve never been inside at least 10 of the businesses that I own.”

He is definitely a glass half full kind of a person.

“It isn’t as simple as hard work or right place, right time. It’s something else. I’m always curious about limits.

“What if or how far can you go? Keep going as long as you enjoy it.”

Twelve gongs will be handed out at Monday evening’s fourth annual Tees Businesswomen Awards greats – with one of either Vikki Jackson-Smith, Zoe Lewis and Chloe Clover set to be crowned Tees Businesswoman of the Year.

Hundreds of delegates and exhibitors – including Tees Business publisher Resolution Media and Publishing – will attend an event showcasing some of the best local businesses.

Despite setbacks faced by the travel industry in the wake of Covid, Stockton-based Dawson & Sanderson has seen a renewed interest in both corporate and lesiure travel and is cheerful and optimistic about the future.