A dedication and determination to inspire and motivate women in the region to achieve their potential has led to unexpected recognition for a Teesside University leader.

The surprise award was handed to Professor Turner in recognition of her work to motivate and empower young women to fulfil their potential and achieve their ambitions.

In an emotional film – which can be seen by clicking here – business leaders described Professor Turner as a force of nature who inspires everyone and as somebody who has worked tirelessly to raise the profile of women in the Tees Valley.

Tees Business co-editor Dave Allan said: “Jane is an incredible, truly inspiring woman who we were proud to honour with the Outstanding Contribution Award.

“Jane is a driving force and an inspiration to many and the short film we showed at the event – full of tributes from leading local businesswomen – revealed just a little of how highly regarded she is.”

Fellow Tees Business co-editor Martin Walker added: “Jane has been one of our biggest ambassadors and has championed the Tees Businesswomen Awards from the day we announced them, so we wanted to recognise and thank her for that.

“But it’s the work she has done for all women across the Tees Valley that we primarily wanted to acknowledge – and the standing ovation she received for her award really said it all.”

Professor Turner is Pro Vice-Chancellor (Enterprise and Business Engagement) at Teesside University and received an OBE in 2017 for her outstanding services to business engagement.

She is often cited as one of the region’s most influential women in business and has been championed for her work to promote gender balance – featuring in the Northern Women Power List 2018, alongside the likes of Steph McGovern and Baroness Sue Campbell CBE.

Congratulating Professor Turner on her latest accolade, Professor Paul Croney, Vice-Chancellor and Chief Executive at Teesside University, said: “Jane is a fantastic ambassador for our institution and is a role model for so many people who are looking to make their mark in business in the Tees Valley. 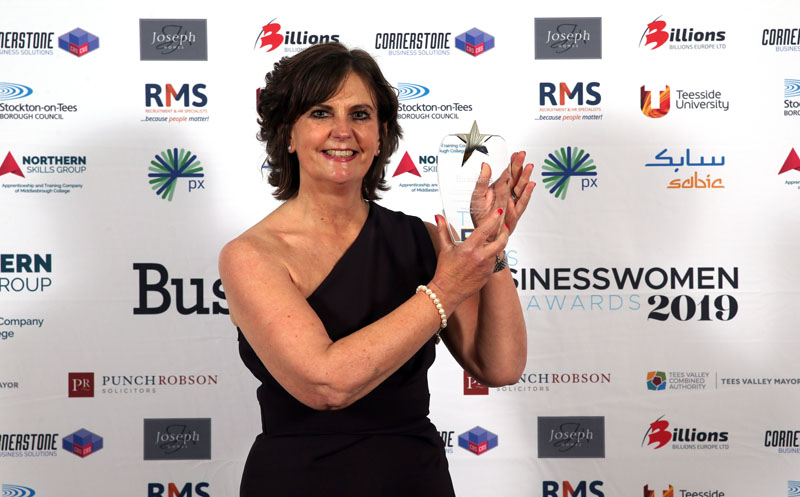 “It is fantastic to see Jane recognised once again for all of her hard work and dedication and I would like to congratulate her on behalf of the entire Teesside University community for yet another incredible achievement.”

Professor Turner said: “I am so fortunate to have a wonderful boss, the Vice-Chancellor, Professor Paul Croney, who enables me to thrive in my role.

“It is extremely important to me that we have female role models in this area who are able to mentor, support and inspire young women. We have to disrupt embedded norms to change the trajectory for generations to come. Next plan is to start to support young boys but more of that later.

“The Tees Businesswomen Awards are a fantastic event which shine a spotlight on the amazing work that women are doing in this region. I am incredibly proud to be able to play a part in that and to receive the Outstanding Contribution Award will rank alongside one of the highlights of my career.”

The publishers of Tees Business have expanded to larger offices, moving into the historic home of Middlesbrough’s founding fathers. Resolution Media and Publishing has taken […]