A leading independent charity specialising in support and training for the Armed Forces community across Tees Valley has gained the Royal seal of approval following its move to new headquarters.

Finchale Group, which provides specialist employment programmes and support across the region for people with complex barriers to employment, has officially opened its new premises at Richard Annand VC House in Mandale Park, Durham.

Her Majesty’s Lord Lieutenant of County Durham, Sue Snowdon cut the ribbon to honour the move to a building named after the charity’s South Shields-born founder and war hero.

She said: “If you look, as I did, at the history of Finchale, the core values are still the same. The core values which are most definitely at the heart of all Finchale Group does.

“And that’s why the trust, respect and reputation that Finchale Group has, has been earned through hard work and professionalism.

“Your new home is first class, a fantastic facility which will enhance your clients and community experiences, making this group stronger than ever.

“You’re providing a foundation to get out there, reach out and touch lives and find new ways to support people and families.

“I’m absolutely overwhelmed and full of enthusiasm and admiration for the huge impact you are making and pay tribute to everyone involved in the organisation. You are doing a great job here and long may it continue.”

Step Forward Tees Valley is among the Finchale Group partners and together they support people in the area to overcome the complex barriers preventing them from finding work, such as physical or mental ill-health, a lack of self-confidence, a gap in skills, a conviction, or an addiction.

Over three years, Step Forward Tees Valley will work with 2,500 people across Tees Valley by supporting them to take advantage of existing voluntary or employment possibilities, as well as working with local employers to create new opportunities.

The project helps people in Tees Valley to build on their strengths and aspirations, using the skills and expertise of partners and local employers to achieve their goals.

For 75 years Finchale Group was based near Finchale Abbey on the outskirts Durham and its Finchale College headquarters was a hostel as well as an educational facility, but a costly one to maintain. 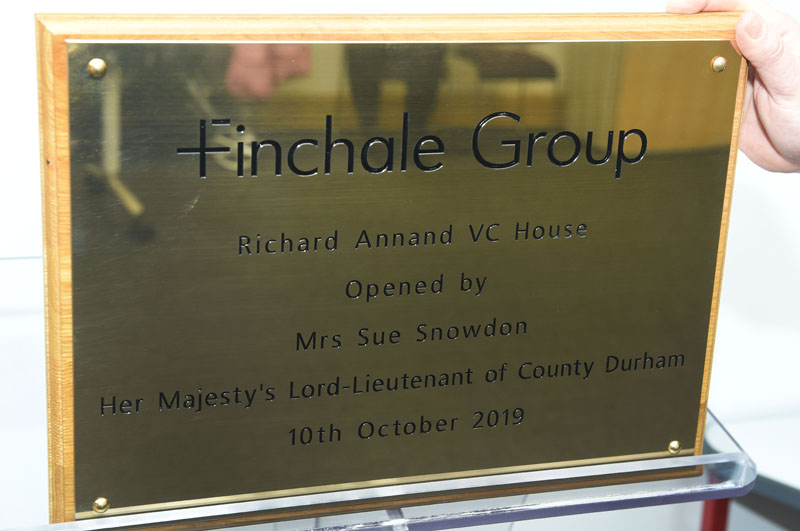 Finchale Group was originally set up by Richard Annand VC to help ex-veterans disabled in the Second World War, after he was forced to retire from military service through injuries he sustained, and it maintains strong links with the Armed Forces community with support and education programmes.

The group is now branching out and expanding and in attendance at the opening were beneficiaries of new initiatives launched this year, including the Security Industry Authority Training course and families from the Female Force Programmes and Family Force Programmes, which is funded by the British Legion to bring force families together and provide support, such as activities leading to better mental health and positive attitudes.

Her Majesty’s Lord Lieutenant of County Durham Sue Snowdon’s bouquet was presented by Forces wives who learnt floristry together as part of the LIBOR Programme, which provides case-managed assistance to the Armed Forces community.

She added: “These are all people who want to make positive changes to their lives, which will enable them to realise their full potential and that they can have and will have a better and brighter future.

“Partnerships are key. They are the vital component to what Finchale delivers and achieves. Partnerships, one-to-one high quality effective training, skills development, support for social entrepreneurs, and business start-ups, coaching, mentoring and so much more.

“To succeed you need these partnerships with local agencies right across the North East who will offer support advice and guidance and also commercial organisations who wish to employ and train veterans and their dependants.”

The move to the new premises comes as the charity goes through its own transformation and expands into the commercial sector, as well as continuing and developing its renowned charitable work.

This month marked the start of their first commercial contract with RT AAA Caretakers and Mandale, who provide ground maintenance for the Mandale Business Park.