A businessman who created a multi-million pound company and an acclaimed writer, producer and film director have both been honoured alongside hundreds of graduates during Teesside University’s winter academic awards.

They were joined by around 800 Teesside University graduates who celebrated their academic achievement during ceremonies held at Middlesbrough Town Hall on Monday 25 November and Tuesday 26 November.

Middlesbrough-born Alastair was brought up in Stokesley. Educated in York at St Olave’s and St Peter’s schools, he later studied at Kirby College in Middlesbrough and then Constantine College, which eventually became Teesside University.

The dad-of-four started his career in the family business, Arthur Jones electrical wholesale, before founding Cleveland Cable Company in 1978.

Alastair said: “When I look back, it never occurred to me for one second that I would end up having my own business, employing hundreds of people in different towns and cities.

“What I would say to any student who is thinking of starting their own business, all you need is a bit of luck and a lot of hard work and then anything is possible.”

He directed the award-winning TV drama Dummy, which won the prestigious Prix Italia Drama Prize, and the US mini-series Moby Dick and Cleopatra, which was Grammy nominated and Golden Globe nominated. 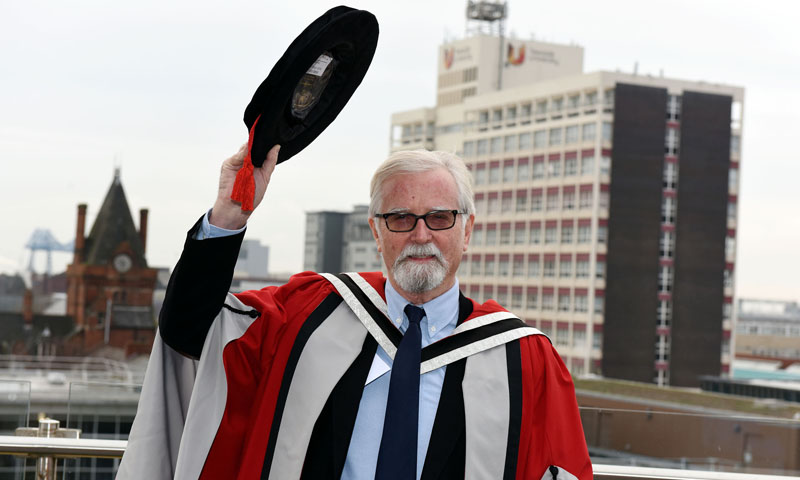 Franc also created the worldwide television phenomenon, Masterchef, shown in 150 countries worldwide with around 65 locally-produced versions of the show.

He said: “To come back to Teesside to become an Honorary Doctor of the Arts is a fantastic thing.

“You don’t expect it, especially as I am in my seventies now and you think I have had all the success I am going to get and all the career opportunities I am going to get, then the suddenly out of the blue comes this, which is so charming and I am thrilled.”

He added: “People in the North-East have big energy, they are quite spirited people who are very charming and I love that about the North-East and that’s why I tried to reflect it in Auf Wiedersehen, Pet and in Mini and in Harry. I have a big debt to the North-East.”

Professor Croney said: “Graduation is always a highlight of the academic year and is a fantastic opportunity to celebrate the academic success of our students who have worked extremely hard to achieve their qualifications.”