A significant investment in worldclass new technology is helping ensure that Teesport continues the already spectacular growth rate in its container volumes of recent years.

Operator PD Ports recently opened an impressive new automated gate system, the latest in a suite of hi-tech developments that will equip the port for an even brighter future.

“We have a port that is growing exponentially at a rate well above the rest of the industry, and has big ambitions to continue growing,” said chief operating officer and vice chairman Jerry Hopkinson.

“We’ve gone from being a small gateway container port only a decade ago to being the fifth-largest container port in the UK, handling about 30 million tonnes of total cargo a year.

“We’ve grown container volumes by 12 per cent annually for over eight years, even during the recession, while average growth in the container industry has been between two and three per cent. But we recognise that to continue growing, we need to adopt the very best processes and systems.”

These included Navis, which employs artificial intelligence to build up information about the way containers flow through the port and uses it to manage processes and improve efficiencies for port users, as well as an advanced Vehicle Booking System.

“We’ve had the technology in for several years and we’re gradually expanding and adopting it. But as our volumes are now growing, and the complexity of our operations is increasing in tandem with that growth, the opportunities this very sophisticated system affords us are becoming ever more vital to the way we want to manage and develop our business.

“The port’s development will not only benefit our customers directly but it will positively impact the wider region and contribute to making the Tees Valley more competitive globally.”

The third element of the plan is the automated gate, which Jerry says will help it retain industry-best average gate-to-gate times – how long it takes for a vehicle to arrive, unload, reload and exit the terminal – even as volumes increase.

“At about 30 minutes, our average gate-to-gate times are excellent in comparison to most other UK ports, who would give their eye teeth to have that kind of turnaround and often average an hour or more,” he said.

“We’re mindful that as we get busier, we need to have the technology in place to ensure we get vehicles smartly in and out of the terminal. Navis enables a haulier to tell us that in two days they will arrive at our terminal, deliver one box and collect another. 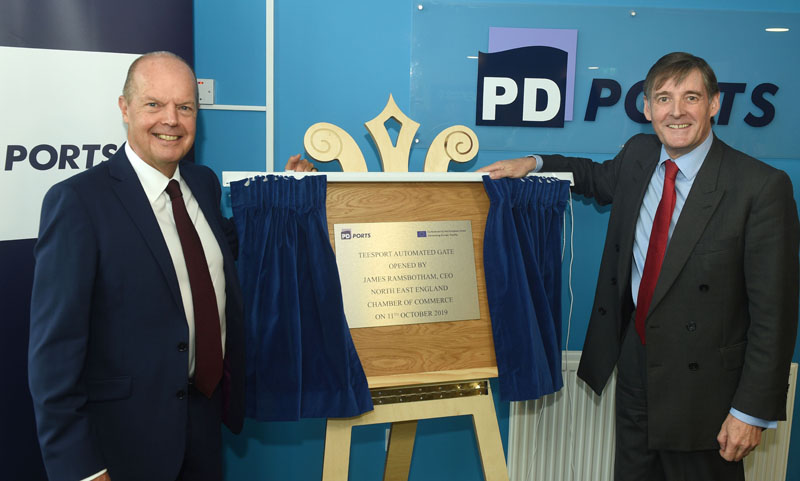 “It will then tell our employees how to stack and arrange the boxes to ensure that they are as close as possible so when that vehicle arrives in the terminal, it’s already in the optimal slot. In a very sophisticated way, this technology is helping to drive the productivity and performance of our business.”

Jerry compares the effect of the automated gate to the way technology has transformed how we travel by air, using smart technology to book tickets and seats and even checking-in online, bypassing many of the processes that led to queues in the past.

“Haulage contractors picking up or dropping off containers at our port can now use an app to pre-book their load in, and arrive at an automatic portal that uses camera technology to scan the container number,” he says.

“The driver has a smart card he swipes and then goes straight into the terminal, offloads his box, collects the one he’s pre-booked to collect and heads back out again.”

The automated gate has been welcomed by Teesport’s customers, who are sharing the benefits of a slicker, speedier system.

“We tested it successfully with our own fleet of 30-plus vehicles and then rolled it out to selected hauliers and also held regular consultations to show them how it would work and answer any queries,” said Jerry.

North East England Chamber of Commerce chief executive James Ramsbotham, who officially opened the gate alongside Jerry on October 11, said: “This is another great example of the way in which PD Ports is developing its capability to enable its customers to access global markets as efficiently as possible.

“Creating this world class facility in the Tees Valley is something of which we should all be so proud. The teamwork required from so many people, working with the port, is a real testament to the ability of so many individuals in the region.”

Having invested heavily in the latest technology, everything is now in place for the company to realise its long-term vision of developing a deep-water container terminal on the River Tees.

“The UK currently brings in something like 85 or 90 per cent of our total volume of imports through ports in the south-east and then we move it mainly by lorry and wonder why our motorways are clogged up and our CO2 emissions are going through the roof.

“It’s because we don’t import and export goods smartly. Somewhere in the region of eight million containers enter the UK annually. The major container ports in the UK are all in the south and south-east, where the road networks are incredibly congested and the rail infrastructure is creaking.

“So we’ve argued that if you bring in goods in a container that is destined for the north of the UK, then bring it through a northern port – and one that can handle and distribute containers efficiently. We think Teesport is the optimal northern port to do this, with excellent rail links into Scotland.”

This logic led Tesco and Asda Walmart to pursue opportunities at Teesport and set up major facilities to enable them to unload non-food goods and then distribute them without the need to be moved to an inland centre first.

Now PD Ports wants to build on those successes and offer a logistics solution that’s fit for what it believes is a very bright future for Teesport and the wider Tees Valley region.