The Castlegate Shopping Centre and Swallow Hotel are set to be demolished as part of bold plans to tackle Stockton’s empty shops and open up the town to the river.

Stockton Council bought the buildings in September before seeking public views on a “once in a generation” opportunity to change the town.

Plans are now being drawn-up after the consultation, which attracted around 1,000 responses, revealed strong public support for putting the site to a different use.

A decision on the ‘Riverside Park’ development will be made next week – with demolition to start in two years and the whole development to completed by 2025.

“We had a massive response to our consultation on the next steps for Stockton town centre and I’d like to thank everybody who shared their views,” said councillor Nigel Cooke, the council’s cabinet member for regeneration and housing.

Under the plans, Castlegate and the Swallow Hotel – which occupy a site around three times the size of Trafalgar Square – will make way for a riverside park and offices.

The riverside park will feature public artwork and pleasant green spaces for families to enjoy.

A “land bridge” structure will enable the park to span a section of Riverside Road, providing uninterrupted access to the waterfront.

The council is also proposing to build a new central library, customer service centre and council office on the site, kick-starting its regeneration and saving money as part of plans to consolidate its 10 existing council offices into two.

The town’s main retail offer will be focussed on Wellington Square, the 700-year-old market, and other parts of the High Street and town centre, such as Silver Street.

The feasibility of covering Wellington Square – which the council bought in May last year – to protect shoppers from the elements will also be progressed.

“What the consultation has shown is strong public support for demolishing Castlegate and the Swallow Hotel, concentrating shops at Wellington Square and making the most of the town’s riverside setting,” said councillor Cooke.

“I think people are starting to realise that high streets have changed forever and the days of them being lined with big name shops are over. We’ve seen it in Stockton with the likes of M&S, Debenhams and H&M all going. 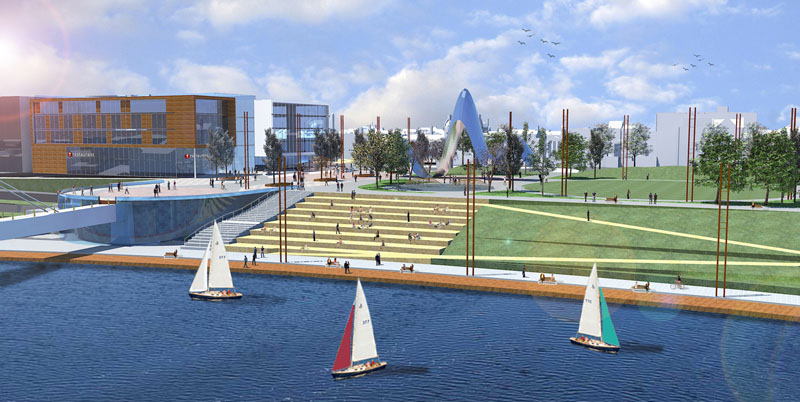 “But it’s all about how we respond.

“We all enjoy reminiscing about the golden era when every town had a big department store but we can’t turn back the clock. We need to take the bull by the horns and get on with reshaping Stockton for the modern age.

“If we do nothing we’ll just see a growing number of empty shops.

“This plan will shrink the town’s oversupply of retail space, bringing it more into line with demand, which will actually boost the prospects of larger units like the former M&S, New Look and Debenhams being reoccupied.

“It will also open up the town to face the river as you see in modern towns and cities across Europe. Stockton has been accused of turning its back on the river over the years.

“It’s the logical thing to do.”

Stockton Council say all of Castlegate’s tenants will be supported to relocate if they want to, with most indicating that they want to retain a presence in the town centre.

There is enough space in Wellington Square and other vacant units in the town centre to accommodate them all.

The council is proposing to use £20m of Tees Valley Combined Authority funding to decant Castlegate tenants, demolish Castlegate and the Swallow Hotel, and clear the site for redevelopment. 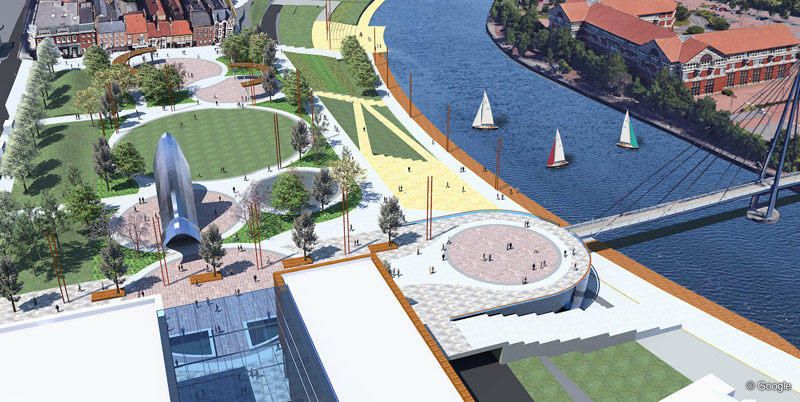 It is also preparing to submit a bid for £21m from the Government’s £1 billion Future High Streets Fund to develop the riverside park and land bridge, with the outcome expected later this year.

Tees Valley mayor Ben Houchen is backing the bid with a letter of support to the Government.

Mayor Houchen said: “Regenerating our town centres so they are the vibrant places we all want to visit is hugely important and it is projects like this that will reinvigorate our town centres – making them fit for the 21st century.”

The proposals for the new council offices will be cheaper and greener than the council continuing to operate its 10 existing buildings and the cost could be met through the council borrowing the money itself.

An alternative would see a private developer fund and build it and the Council then take a long-term lease on the building.

The plans will be considered at meeting of the council’s cabinet on Thursday, February 20.

If agreed, the decant of tenants from Castlegate would get under way with a view to starting the demolition of Castlegate and the Swallow Hotel in 2022.

The construction of the riverside park and office buildings would follow with a target completion date of 2025.

Stockton-based tailor Norman Ainsley has spoken of his sadness when lockdown happened, stopping 20 years of customer service dead in its tracks one spring day […]

Praise for Tees-based companies that have not only weathered the coronavirus storm but also seen their businesses grow has come from UKSE. The Tata Steel […]