Middlesbrough mayor Andy Preston has revealed that planning permission for £30m digital skyscraper Boho X is being submitted today – with building work set to start in late summer for completion in 2022.

Along with private investment in two neighbouring residential skyscrapers, Boho X will be part of a £45m first phase of an overall £250m digital project.

At 260ft, the tallest office building between Leeds and Glagow, Boho X will be built on land close to where the original Middlesbrough Farm once stood before the growth of the town as a 19th century Ironopolis.

He unveiled new artist’s impressions of a building that could eventually be the workplace for up to 1,000 people

“Boho X will be a stunning digital skyscraper on the very site where Middlesbrough first grew into the famous Ironopolis,” he said. 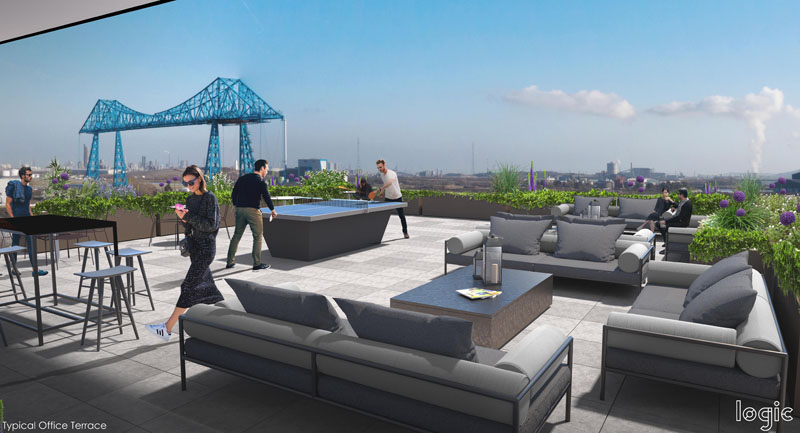 “Thanks mainly to funding from Tees Valley mayor Ben Houchen and the combined authority, £30m is now in the bank for a world-class digital building that, along with a private investment for residential skyscapers, represents the biggest ever single investment in Middlesbrough.

“And this isn’t a long-term vision. It’s happening now! Planning permission is being submitted today. Building work starts in late summer and Boho X will be open for business in 2022.

The announcement also saw the mayor reveal the names of the first organisations to commit to taking space in Boho X – Middlesbrough College, Northern Stable (sister business of Visualsoft), Logic Architecture and the Endeavour Partnership.

Mr Preston added: “Boho X is just the start. Soon we will be changing national and international perceptions about Middlesbrough forever.

“We really can make Middlesbrough the digital city, attracting and creating well-paid jobs.

“I believe it will represent the North’s very best office space – at a fraction of the cost for similar space in Newcastle or Leeds.”

Just a minute’s walk from Middlesbrough railway station, which will soon have direct links to London, it is planned for Boho X to feature a gym, café, 20-seat cinema, 200-seat lecture theatre and 750-seat events space.

With just over a month to go before the inaugural Tees Tech Awards, plans are being finalised for what promises to be a ground-breaking event. […]

Andy Preston has issued a call for people to safely support the town’s restaurants, bars and businesses after the closure of one well-known eaterie. Bistrot […]

PD Ports has submitted its response to the Government’s consultation on freeports. The response underlines the huge investment and jobs boost that a freeport located […]