New routes across the UK and Ireland have taken off from Teesside International Airport, with the first flight arriving from Southampton given a special welcome.

Eastern Airways’ routes to Southampton and Belfast City have jetted off from the airport, with the first flight to Dublin in a decade also set to take off.

The 10.15am flight from Southampton, which operates twice a day from the airport, was welcomed with a water salute from the airport’s firefighters, a traditional aviation ceremony to mark a flight of significance. 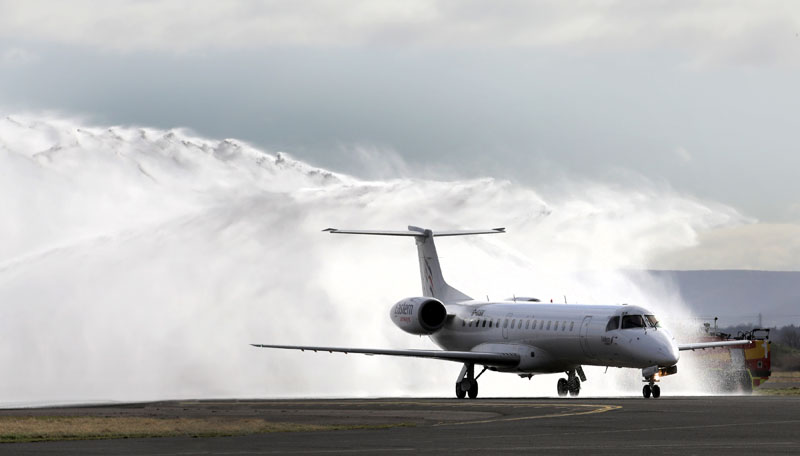 Tees Valley mayor Ben Houchen was also on hand to welcome the first passenger, Katharine Stewart, arriving at the airport from Southampton on business.

The new flights departed on time following news that Teesside International Airport and Eastern Airways’ services would be unaffected by the collapse of airline Flybe, and that all services would continue to operate as normal from the airport.

Mayor Houchen said: “These departures shows loudly and clearly that it’s business as usual at Teesside International Airport and it was great to be able to give the first Southampton flight a warm welcome.

“When we brought our airport back into public ownership and saved it from closure, we were putting in place the building blocks to a brighter future for our airport. These flights show that we are making great progress in our plan to turn around our airport and make it the success we all know it can be.

“It has been a very uncertain time for passengers after Flybe announced its collapse last week, but Teesside remains unaffected by the news and people across Teesside, Darlington and Hartlepool can be assured there is no disruption to flights.

Roger Hage, Eastern Airways’ general manager commercial and operations said: “It’s an important day for Eastern Airways as we expand our network of routes from Teesside International Airport. Regional air services are vital for the economic prosperity and development of each region, and by introducing flights to Belfast City, Dublin and Southampton, we are further strengthening accessibility to these major cities. Now we are operating our routes independently, flights are bookable via our own website EasternAirways.com.”

Kate Willard of Stobart Group said: “The launch of these flights is great news for Teesside International. We’re pleased to be supporting the opportunity for even more growth at the airport, helping it go from strength to strength.”

The first flight arriving to the airport from the Northern Irish capital will include a delegation of travel agents on a visit to the region, so they can see first-hand the opportunities Tees Valley has to offer and promote the service back in Belfast.

Routes to Eastern Airways’ remaining destinations, twice-daily services to London City Airport will take off next month, and the Isle of Man seasonal service start at the end of May.

A new seasonal twice-weekly flight to Alicante, starting at £119 per person one way, including taxes and charges, has also recently been announced and will begin on July 17.

Tickets for all flights are now on sale at www.Easternairways.com