The publishers of Tees Business have expanded to larger offices, moving into the historic home of Middlesbrough’s founding fathers.

Resolution Media and Publishing has taken three offices on the first floor at Plenary BV House in Queen’s Square – formerly Cleveland Buildings and home to Teesside’s pioneering ironmasters, Henry Bolckow and John Vaughan, between 1841 and 1860.

And Resolution directors Dave Allan and Martin Walker are hopeful they can still press on with their growth plans.

Dave said: “We’re facing uncertain times and Resolution isn’t without its challenges as we try to navigate our way through the aftershock of the pandemic.

“But we remain committed to our growth plans and this is a statement of our intent to continue building on the work of the last five years.

“We’re delighted and very proud to be moving and expanding into such an iconic and historic building.”

Middlesbrough’s oldest building on the north side of the A66, Plenary BV House – also known as Boho Seven – includes the saloon room fireplace from the ocean liner Aquitania, which was scrapped in Faslane, Scotland, in 1950.

Occupied by accountants Gilchrist Tash before Plenary bought it in 2011, the imposing building has three floors and a cellar, complete with old safe room where valuable documents were once kept.

Of the 6,500 square feet of office space, most of it is rented out, with tenants including brand agency Better and Plenary’s sister company, FNVI.

Resolution non-executive director Bob Cuffe said: “The move to this iconic building is an incredibly positive one by Dave and Martin.

“They – and the Resolution business – are absolutely rooted in Teesside and these offices are perhaps the region’s finest in terms of history, heritage and significance.

“Henry Bolckow and John Vaughan were the founding fathers of Middlesbrough and drove its dramatic growth, and their building is the perfect setting for the next chapter in Resolution’s history. 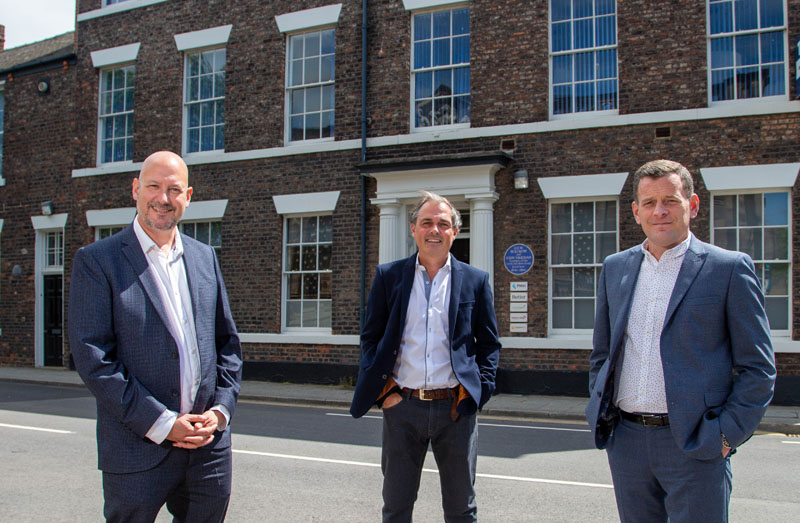 “Making this move at this time is a positive and confident move by Dave and Martin – it reflects their success in recent years and their ambitions for the future.

“It will be great to see our partners and clients in the boardroom in the weeks and months ahead. These are exciting times and I look forward to helping the team realise their ambitions in the region.”

There’s an external difference between the 19th century brickwork at the front of Plenary BV House and a three-room extension built on the back in the 1950s.

And inside, it’s like a carefully refurbished rabbit warren, with rooms and stairs everywhere, including the old scullery with its tin fireplace, the old staff quarters at the top of the house and “The Cottage” – a former surgery where men injured while working by the river were treated.

And in a nod to one of the town’s former mayors, Sir William Crosthwaite, a window on the stairs bears the seahorse logo of the Crosthwaite Tees tugs, complete with Latin motto “facta non verba” – deeds not words.

“The building is close to fully occupied now – we only have two offices remaining – so it will be fantastic to see it full of people as we see social distancing measures relaxed in the coming months.”

Businesses who may be interested in the remaining office space at Boho Seven can email chrismcglade@plenary-projects.com.

Peter Snaith is a partner at Womble Bond Dickinson (UK) LLP, manufacturing sector head and head of the firm’s Teesside practice. Here he examines the […]

Stockton-based Ryze, which was established in 2018, has been honoured in the Corporate Communications category of the Webby Awards for its work with revolutionary data […]