Close Protection Security (CPS) has quickly become one of the region’s go-to security firms, with a number of high-profile clients, a staff of 60 and exciting plans for expansion.

Managing director Glenn Bartlett learned his trade from the age of just 18 at Yarm’s Tall Trees nightclub and is now reaping the rewards of his hard work and determination.

However, he’s also aware that success can be lost as easily as it is gained without a loyal workforce.

“Our team strive to be the best and I lead by example,” says Glenn.

“I’m very hands-on. I think nothing of getting out of bed at 3am if there’s an issue at one of our sites.

With newly opened premises on Middlesbrough’s Riverside Park, which Glenn has had fitted out with a state-of-the-art gym for his team, CPS are now in the ideal location to respond to their local clients such as AV Dawson, Scott Bros and Middlesbrough FC.

“We’ll be there in one-to-three minutes, less time than it would take the police,” he says with pride.

“In an ideal world we will eventually look after the security of all local firms.”

Certainly their current clients are full of praise for the team.

“Glenn and the team have adapted readily to our changing needs and have assisted greatly with additional measures during the Covid-19 crisis. The relocation to TeesAMP, which is only a few hundred metres from our terminal, is also very reassuring.”

Peter Scott, managing director of Scott Bros, is another who only has positives to say about the firm. “We switched over to CPS in 2018 as we had a number of issues regarding site security,” he says.

“Since taking over, they have surpassed all my expectations and have gone that extra mile regarding all security issues.”

Not that CPS has ever struggled for work.

The first job for the fledgling company was the Tees Air Show in 2017, when Glenn deployed 56 security staff. A job perfectly executed led to a contract with Teesside Airport, followed by AV Dawson and the firm’s first million-pound turnover.

Like most local lads, Stockton-raised Glenn, who now lives in Wynyard, was and still is an avid Middlesbrough football fan – so to then bag the gig of 24-hour security at the Riverside Stadium and Rockliffe Park training ground together with all MFC executive security meant a great deal to him.

“The team for the MFC contract includes three ex-military staff – one Royal Marine commando, one formerly with the Parachute Regiment and one Royal Electrical Engineer. 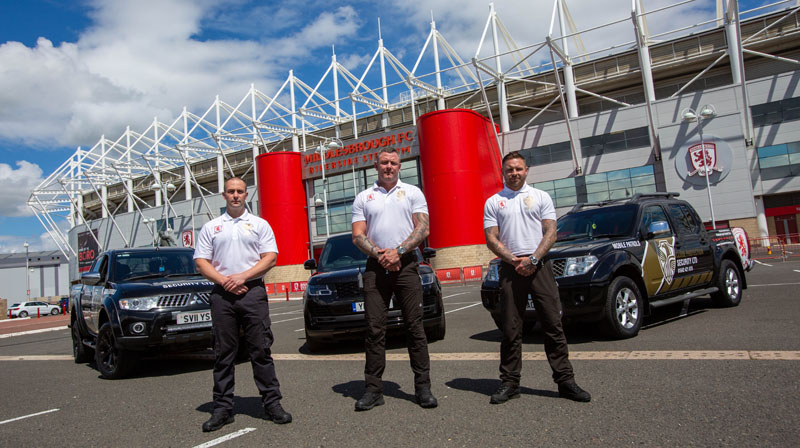 Alongside their co-workers, they have received a massive amount of praise due to the huge improvement in security since Close Protection took over.

“We have two canine units permanently on the Riverside Park estate seven nights a week. So if an alarm goes off, we can respond with a dog and handler and detain the people targeting the area.”

Certainly, CPS are radically different to security firms of old.

“We have an app which allows us – a nd the client – to see exactly where the guards are and what they are doing, plus we have a team of supervisors paying regular visits to our sites.”

Glenn finds it difficult to speak of the exciting plans for the future of CPS given the current economic downturn.

“I know that Covid-19 has affected people through no fault of their own and companies are failing because of it,” he reflects, but he adds that CPS is able to offer employment hopes to some of the region’s workforce.

CPS has partnered with Cleveland Fire Brigade to provide security at their headquarters.

“We provide a team of four staff at their 999 call centre and we are working alongside them to provide additional training for SIA (Security Industry Authority) and first aid.”

The firm has also provided 11 men daily since February on the Anglo-American’s Woodsmith project for CFB Risk Management, a company owned by Cleveland Fire Brigade.

The sheer volume of work has allowed Close Protection Security to increase its workforce to 72 from August, and plans for a training academy are nearing completion.

“The training academy will be fully operational from August 1, offering all aspects of security training from close protection to door supervisors and other security related work.

“When I mentioned the academy on Facebook we were inundated with messages and calls from people wanting to be trained by us to our standards and off the back of the announcement a local educational establishment approached us to work with them to do their security courses.”

With an ever-increasing list of companies keen to access CPS’s services – including security driving for chief executives and celebrities in a fleet of top-of-the-range vehicles – does Glenn ever consider leaving Teesside?

“We were scheduled to fly to Dubai to open an office there, but had to cancel our plans due to Covid,” he replies.

“However, plans are being laid for a Middle East branch. I wouldn’t leave home personally as I like to see clients and keep our team fully alert. I can’t do that if my static base is elsewhere. Our close protection and security drivers travel worldwide but someone always reports back to me or James, our operations director.”

Ever the believer in counting his blessings and giving back, Glenn supports a military charity which aims to get veterans back into work.

“We employ seven ex-military personnel and the clients love them,” he says. “They do a fantastic job and it’s good to know that we are part of the next phase of their lives.”

Find out more at closeprotectionsecurityltd.com

Tees Components has increased its cohort of apprentices with the addition of two new positions as the heavy machining expert continues to grow its workforce. […]

There was a four-way battle for top spot between Chadwicks Inn, Muse, the Crathorne Arms and the Bay Horse in our closest ever annual poll […]