Filming 33 shortlisted candidates for the Tees Tech Awards over just two days in the midst of a pandemic may sound like a logistical nightmare, but the team at Wander Films have risen to the challenge – and are ready to reveal a series of short videos.

Wander were commissioned by Tech Awards organisers Tees Business to showcase the cream of the region’s tech talent in snappy, two-minute videos featuring their signature humour and pops of colour.

“We were super excited when we heard we’d got the gig creating the shortlist videos,” enthuses director Lou Tonner.

“The Wander team had heaps of cool ideas on how to make them fresh with a modern tech and digital vibe, so to be given free rein was brilliant. We also knew it would be a lot of fun filming with other tech leaders in the region.”

Wander were commissioned to do the suite of films before discovering that they’d been shortlisted for two categories themselves, while Lou’s fellow director Chloe Clover is also a finalist for both the Business Leader and Rising Star categories.

“We couldn’t believe it when we found out we’d been shortlisted four times,” breathes Lou.

TWO weeks and COUNTING!Here's a little teaser of the 2020 Tees Tech Awards, which will be streamed on YouTube from 7pm…

“We feel incredibly humbled, to be honest. The shortlists were created by scoring from different panels, independent of Tees Business, and we just feel so much love from those companies around the region who were judging.”

Having their bosses in front of the camera rather than behind it for some of the time was a source of pleasure for the rest of the team.

“Oh yeah, we had fun filming ourselves, which you may or may not see in the final edit!” laughs Lou.

“Jack was behind camera while Chloë represented herself and I represented Wander. It’s always good fun filming with the team, we make each other laugh constantly.”

As for the people they met during film, Wander were amazed by the wealth of hitherto hidden talent in Teesside’s ranks.

“Oh my, it was amazing to meet these people,” smiles Lou. 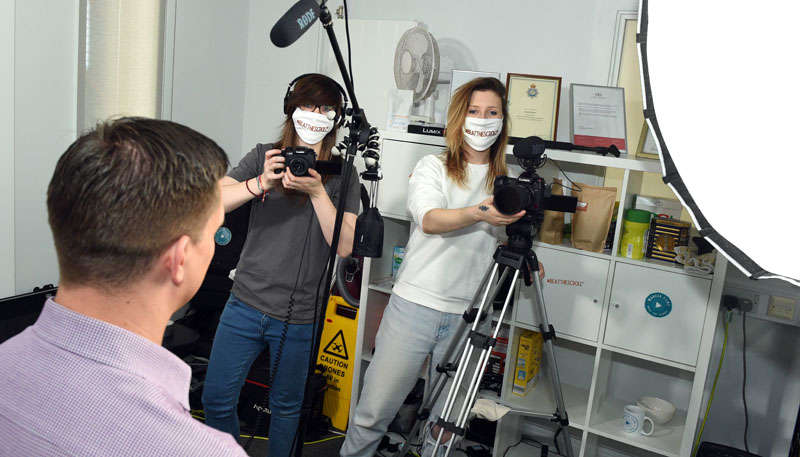 “There are so many tech companies in the area doing such incredible things, and to hear them speak about who they are and what they’re up to is mind-blowing. We also got to film some clients, good friends and a few Boho 5 neighbours, which was great.”

Along with the rest of the sector, Wander are looking forward to the live streaming of the awards on YouTube from 7pm on Thursday, August 20.

“It’s a brilliant idea and we’re really looking forward to it,” adds Lou. “Live streaming so people can watch from their homes or offices totally makes sense. It will be a mega achievement for the region and we hope everyone enjoys the celebrations.”