The inaugural Tees Tech Awards were described as a “fantastic endorsement of the local digital sector” as Mabo won the big company gong while Dominic Lusardi and Lee Hutchinson received the big individual accolades in Thursday night’s long-awaited virtual event – with Salesfire picking up two gongs.

The inaugural Tees Tech Awards were streamed as live during a 90-minute show on the Tees Business YouTube channel – with ecstatic winners celebrating across 11 categories.

Organised by Tees Business, in association with DigitalCity and Middlesbrough Digital, the awards were originally scheduled to be held in April in Wynyard Hall’s Grand Marquee but were postponed and rearranged due to the Covid pandemic.

More than 90 entries were received with five sponsors giving their scores across five categories each to ensure there were no kingmakers in the most democratic of “judging” systems. 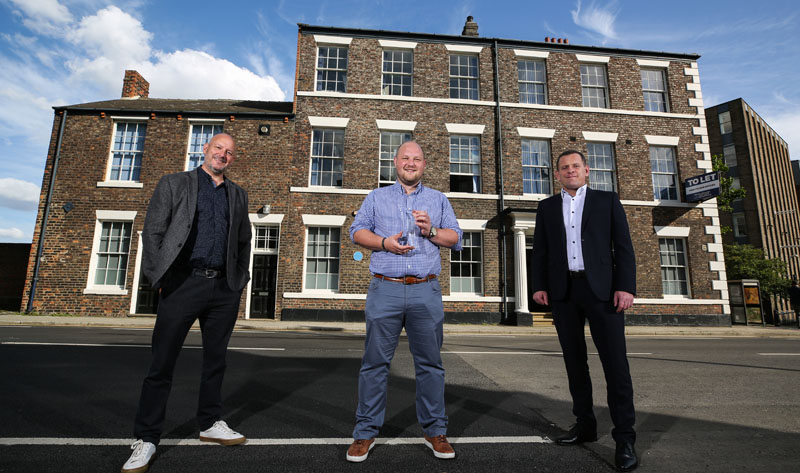 The Business Leader accolade, sponsored by Punch Robson Solicitors, went to Lee Hutchinson who has led the growth of Double Eleven into one of the region’s biggest game development studios, employing 85 people. Lee triumphed over fellow finalists Chloe Clover of Wander Films and Tom Howsam of Paid.

Animmersion’s Dom Lusardi secured the Tech Ambassador title, sponsored by Cornerstone Business Solutions, thanks to his devotion to the region’s tech sector, constantly striving to support and raise its profile and support others within the industry. Hot on Dom’s heels and worthy finalists were James Lees of Mabo and Darren Falcus of SockMonkey Studios.

Other worthy winners were Code 4000 who won the Tech For Good category, sponsored by Domino’s Teesside, beating off competition from Stockton’s Adeo Group and Guisborough-based ItchyRobot. Working at Stockton’s HMP Holme House, Code 4000 teaches offenders coding skills to increase their chances of finding employment on release, reducing their risk of reoffending.

Wander Film’s Chloe Clover was “Stoked” to be named Rising Star in the Middlesbrough College-sponsored category, pipping Ben Doherty of Tascomp and Ryan Jessop of Carbon to the post.

Everflow Water – based in Middlesbrough and Wynyard – took the top spot from Psyche and CPD Bodies in the Digital Transformation category, sponsored by Baldwin’s Group.

Kraken IM won the Small Business category, sponsored by Jacksons Law Firm, despite stiff competition from Wander Films and Calm Digital. Kraken have received investment from Boeing and have also signed a global framework agreement with one of the world’s largest oil companies.

For the Innovation Award, sponsored by Tracerco, they held off fellow finalists Intasite and Everflow Group, while the Best Newcomer category – sponsored by Recognition PR – saw them win a second time despite strong competition from Wander Films and Aero Commerce.

Calm Digital and Intasite were worthy winners of the Tech Partnership trophy, sponsored by Communicate Technology PLC, ahead of bids from Sapere and Absolute Antibody and a second entry from Intasite, this time in partnership with PD Ports.

Martin Walker, of organisers Tees Business, congratulated all the winners and thanked the sponsors before describing the awards as “a fantastic endorsement of the local digital sector”.

“It was clear to see what the awards meant to the winners and finalists but this was really about celebrating all that’s good in a sector that’s blooming but too often under the radar. These awards have helped to change all that – and we aim to keep it going year after year.”

Fellow organiser Dave Allan said the awards represented “a victory for determination and creativity in the face of adversity”, with the awards having been rearranged several times to adapt to the changing challenges of Covid.

“It was the occasion we originally envisaged but we’re confident the awards will stay long in the memory and have absolutely delivered on all that we wanted to achieve.”

• Look out for more coverage of the Tees Tech Awards on the Tees Business website in the forthcoming days and in the autumn issue of Tees Business magazine, published late September.