The Tees Tech Awards can kick-start a new “voice” for the thriving local digital sector, says James Lees, after receiving the Company of the Year gong on behalf of pay-per-click specialists Mabo.

Mabo were the big winners in inaugural awards fittingly forced to go to virtual due to the ongoing pandemic.

“It’s time for a collaborative voice,” said James. “The Tech Awards have showcased the incredible talent our region has and it’s time to shout about our achievements.

“If Mabo, as company of the year, can be the figureheads for that voice, that would be amazing.”

Organised by Tees Business in association with DigitalCity and Middlesbrough Digital, the awards were streamed as live on YouTube after filming at the studios of local firm Recognition PR.

Middlesbrough-based Mabo was crowned Company of the Year ahead of fellow finalists SockMonkey Studios and Tascomp.

“For once in my life, I’m speechless!” said marketing director James, who was also a finalist for the Tech Business Leader award. 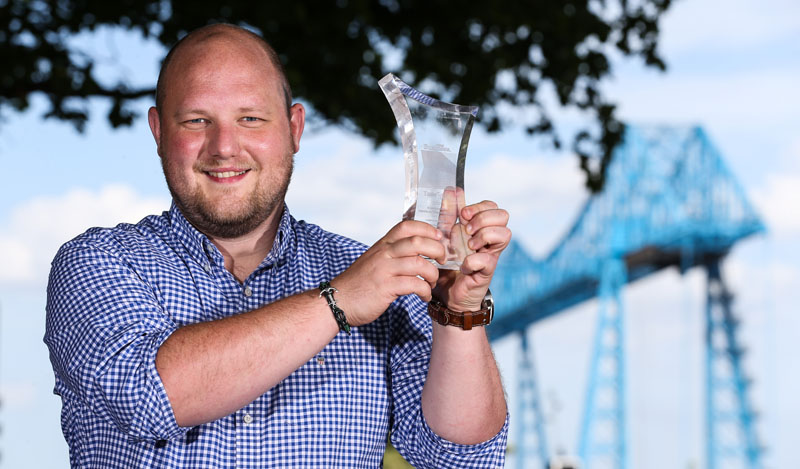 “The tech sector in the Tees region is so strong that it was enough to just be shortlisted alongside two amazing companies, let alone actually win the award.

“I know Bob Makin and I know that SockMonkey Studios has skyrocketed in the last two years.

“Tascomp, I wasn’t so familiar with, but when I read up about them I was blown away with their achievements. To be judged better than them over the last 12 months is humbling. We’re on cloud nine!”

Click here to see a round-up of all the winners on the night.

Impressive partnerships with Google and Microsoft, fantastic retention rates and an impressive stable of clients proved to be an award-winning entry for Mabo.

“Our competitive edge maybe sealed the deal but we wouldn’t be where we are now without our loyal staff. I’m so proud of them, they all care deeply about Mabo and we fight as a team for everything that we achieve.

“We’re all local and the directors are Boro-born and bred. There’s no one prouder of Teesside than me.”

Jane Armitage was crowned Businesswoman of the Year, there was a posthumous Outstanding Contribution Award for Julie Donaldson and Annalice Argyle completed her comeback from […]

Andy Preston has thanked a local business owner for an “incredibly generous” £20,000 personal donation to help local children who are missing out on their […]