An exciting new product designed by Teesside company IC Spray could be a game-changer in the fight against Covid.

Developed in just a matter of months by directors Stephen Larkin and Stuart Brown alongside their team of technical engineers at Kirkleatham-based Sealpump, EU Tunnels are a quick and easy way to check someone’s temperature and sanitise them before they are allowed entry to a building or event.

“It’s just like walking into an airport scanner,” explains Stephen.

“A thermographic camera takes your temperature, an alarm sounds if it’s too high and you’ll be denied entry.

“If your temperature is fine, you’ll then be sprayed with a dry sanitiser. Sounds complex, but all of this is done in split seconds.”

The EU Tunnels, which was created in partnership with Barcelona-based EU Spray, can be easily erected at airports, shopping centres, sports stadiums, festivals and office blocks – anywhere in fact where there is large footfall – and comes in three variations costing £13,000, £9,500 and £7,500.

The most advanced tunnel, called the EU-Tunnel Top, promises to be an invaluable support in the Covid track and trace procedure.

Stephen explains: “As well as the thermographic camera and the sanitisation spray, the Top Tunnel has facial recognition and is human voice-activated. It can, for example, recognise that you are not wearing a mask, PPE or hard hat and will tell you to put these on before allowing you entry.” 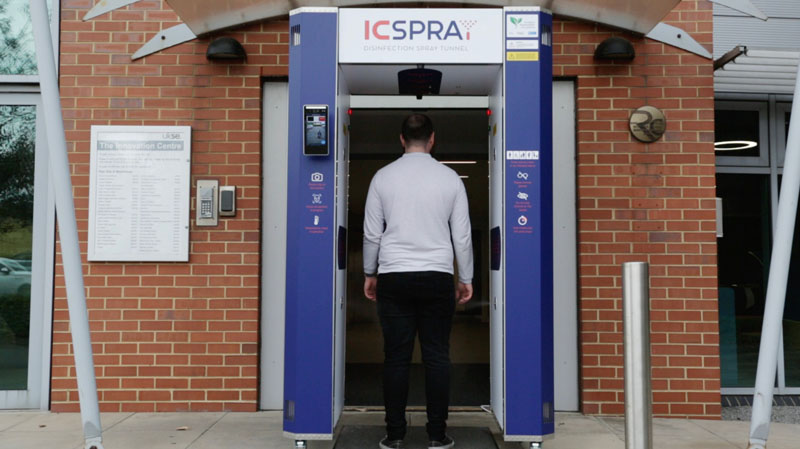 Arguably EU-Tunnel Tops most exciting feature, however, is that it can be preloaded with the names, emails, phone numbers and details of up to 10,000 people, so if someone using the tunnel later has a positive Covid test, it will be simple to send a blanket email to those who have had contact with them.”

It also has further capacity to record and store a large number of visitors.

A machine such as the EU Tunnel would generally take years of development, but Sealpump Engineering has turned it around in just a matter of months.

In pre-Covid days, the company would service the chemical, food, pharmaceutical and steel industries, designing, manufacturing and supplying industrial spray and humidification systems.

They have built an enviable reputation during their 40 years of business, but even the most established firms have felt the pressure of the pandemic, and Sealpump Engineering was no different.

“I admit that the pandemic hit us hard at first,” says Stephen, who employs seven local staff. “We knew that something needed to be done – and fast – so we thought on our feet.”

Sealpump first created handheld mobile fogging systems which enabled smaller firms to make their premises Covid-secure, and which gave IC Spray a financial boost, allowing them to turn their expertise toward the bigger picture.

“We used our integrity and very quickly adapted what we had to create something that we hope will be a game changer in the fight against Covid,” says Stephen.

As the EU Tunnels begin to roll out, Stephen and the team are looking forward to welcoming Redcar MP Jacob Young and have invited Tees Valley mayor Ben Houchen to see for themselves this very important milestone, created right here on Teesside.

“It does give you a feeling of pride to have done your part,” admits Stephen with a smile.

Hartlepool Sixth Form has appointed an industry specialist to lead its new engineering and technical curriculum. And college leaders believe the appointment of Jeff Bower […]

A new foundation will safeguard Teesside International Airport for future generations, says Tees Valley mayor Ben Houchen. In the future, before the airport could be […]