It’s been a family affair for 70 years – and a Teesside steel firm plans to keep forging ahead with the founder’s grandchildren at the helm.

Steel stockist and profiler SM Thompson, which is celebrating its platinum anniversary, delivers a range of services from its site on Dormor Way in South Bank, Middlesbrough.

But it’s been a Teesside success story ever since it was formed by Stanley Moorhouse Thompson in 1950 and was registered with Companies House on October 11 the same year.

Its first offices were in the old Port Clarence railway station but, in 1955, the fledgling firm moved to a much larger site by Middlesbrough’s Newport Bridge – called the Marathon Works after Stanley’s interest in athletics.

In 2015, the Marathon Works moved to their current home. And with Stanley’s eldest son Howard, the current chairman, now planning to step back from his duties, it will be his children – MD Harvey and director Holly – who will drive the firm forward, aided and supported by a loyal and committed workforce.

And it’s that sort of loyalty that Howard, 73, says has been one of the keys to SM Thompson’s success.

He said: “I like the people who work with me, they’re a good bunch. And I’ve never been one to crack the whip – I prefer friendliness to threats!

“Personally, I’ve always enjoyed the steel business. Even in my holidays when I was a lad, I’d go out as a lorry driver’s mate. The industry is in my blood.

“Recently, it’s been a frustrating time for everyone but you’ve just got to keep going – there’s light at the end of the tunnel. It’s a matter of getting through the tough times and doing well enough in the bad times. You’ve just got to keep at it and do the best you can – that’s all I ask of everyone. 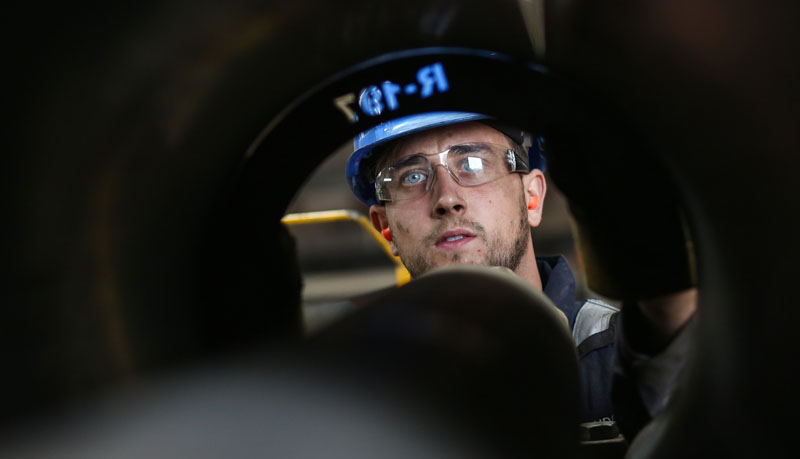 And Howard says local loyalty has been one of the firm’s strong points.

“There are lots of steel stockholders in the country but we look after our local people – we can give them better deliveries than someone 100 miles away.

“We guarantee delivery dates and if we can’t do a job, we’re upfront about it and people appreciate that.

“I’m delighted Harvey and Holly seem to both enjoy it as much as I did. It’ll be in safe hands. They realise that by working together, you achieve goals.”

Harvey, 43, has been with the firm since he was 18, working his way through the ranks and experiencing every aspect of the business.

Holly got involved relatively late, having spent several years travelling, largely in the hospitality business. But together, they’re determined to keep the SM Thompson name a key player in the steel stock and profiling business.

And Harvey believes continuing to invest is crucial.

He said: “We try and buy the latest technology where we can because it keeps us at the forefront.

“But we’re always looking at ways of keeping ahead of the game.”

Holly added: “We must credit the workforce because we know we can rely on them to get work out of the door to a high standard, and on time.

“If something is needed on Monday morning and it means working the weekend, they’ll do it and put their all into it – they always deliver.”

Egyptian-born Tarek Thoma, owner of Middlesbrough restaurant Oven has expressed his Teesside pride at being honoured by his adopted country in the Queen’s Birthday Honours. […]