One of the youngest winners of last year’s Tees Businesswomen Awards has urged firms and individuals to enter or nominate others for this year’s event – with the deadline fast approaching.

Marcia Pryce’s star has continued to rise in the 12 months since the young chemical engineer won the Breaking The Mould category at the 2019 Tees Businesswomen Awards.

“Oh, it was a massive boost to me,” Marcia admitted, crediting the award with an increase in personal confidence. “It’s been a heck of a ride.

“The confidence that winning the award gave me helped no end, particularly when it came to gaining a partnership at university.”

A year of hard work and dedication has followed her win, with Marcia – who was representing Middlesbrough-based chemical firm Seqens-Chemoxy and Lancaster University – successfully publishing papers and gaining a Masters in chemical engineering in partnership with Bowland Bioenergy.

“It was a lot of hard work, but well worth it!” said Marcia, who completed her degree in just 12 months.

Marcia has recently taken up a position as a graduate process engineer with Billingham-based global science and chemicals company Johnson Matthey.

Looking back at the Businesswomen Awards, Marcia said she still has to pinch herself that she won.

“Winning the Breaking the Mould Award was an incredible accolade,” she reflected.

“Just being shortlisted in itself was a huge thing, especially when I realised that I was in the running alongside women who were CEOs of big companies. I felt very much like a little fish in a big pond!”

It was one of Marcia’s Seqens-Chemoxy colleagues who nominated her.

She recalled: “I remember thanking them at the time, but it was only later when I found out just how much work they’d put into it that I was amazed and just so grateful to be thought worthy of the nomination.”

Marcia attended the awards ceremony at Wynyard Hall’s Grand Marquee with her father and recalls seeing one of her bosses from Seqens-Chemoxy on a nearby table.

“He briefly came over, congratulated me on being shortlisted and said that he was as proud as punch of me. It was lovely. 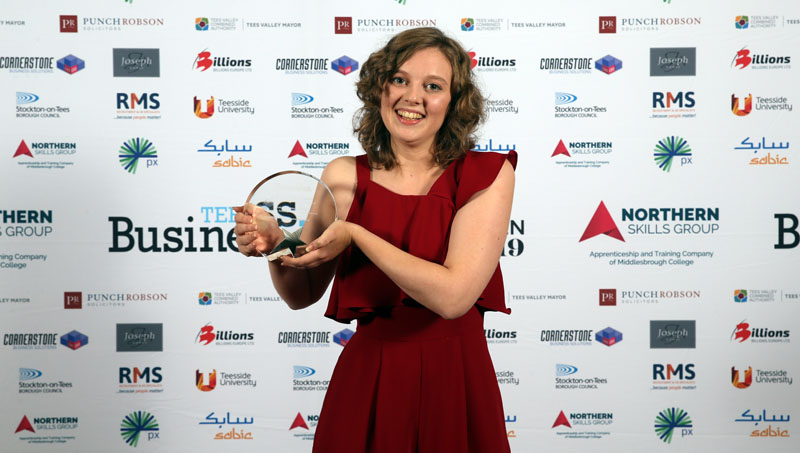 “Of course, when I won – which was a huge surprise, to say the least – I just remember seeing this absolutely huge grin on his face!”

Thanks to her positive experience of last year’s event, Marcia would be the first to encourage other women to enter this year’s awards or to nominate others.

“The Tees Businesswomen Awards are not only fantastic for the Tees region, but a great boost for companies and individuals alike,” she said.

“I would never have met and kept in touch with some incredible people if I hadn’t had the privilege of being nominated and attending the event.

“Perhaps more importantly though, the awards are also about women empowering other women – and I’m all for that.”

For further information on sponsoring one of the two remaining categories in the Tees Businesswomen Awards 2020, contact Chris Garbutt on 01642 450255 or email info@teesbusiness.co.uk

Click here to find out more about how to enter the awards or to nominate someone else.