Initial designs of what the 42-bedroom hotel to be built in Redcar could look like have been revealed – as well as the identity of the planned operator.

Subject to planning approval, the North East chain, Inn Collection Group, who also own the Kings Head in Newton-under-Roseberry and The Stables in Whitby, are set to finance and develop the hotel and family restaurant which will be based in Coatham.

This follows the announcement that a ‘heads of terms agreement’ had been met between Redcar and Cleveland Council and the group, meaning an agreement has been reached on how the Council will release the site.

The group is intending to spend £6.5m on the development.

The government has provided £750,000 of accelerated funding, set against the Redcar Town Deal funding scheme, for the project.

The council is using part of this funding to demolish the old RKade building and prepare the site so the hotel can start development.

Preparation for demolition on site will start on January 4, with demolition taking place a few weeks later. The car park between RKade and Tuned In! will be occupied during this period. 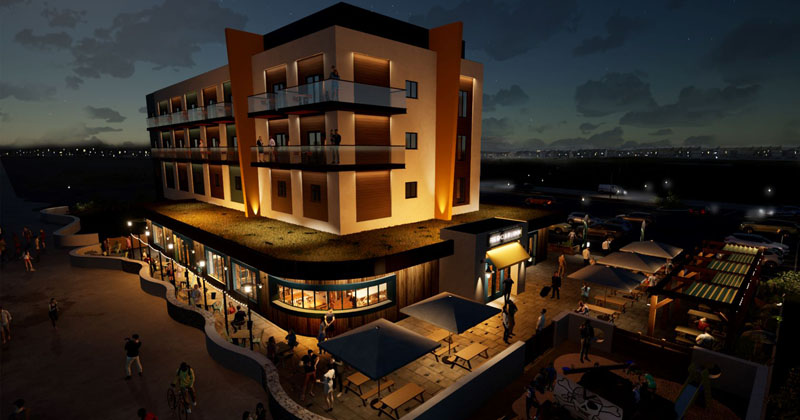 An 18-hole adventure mini-golf course, a new play area for children, public realm improvements along with parking and a recreational area on the Coatham Bowl site is also planned for the area, which comes under the Council’s first phase of the Coatham leisure development.

Phase 1 will be funded through the Tees Valley Combined Authority’s ‘Welcome to Redcar and Cleveland’ Investment Fund.

It is expected that the project will bring 50 full-time jobs once the hotel is built, while 60 jobs are also expected to flow from the construction stage.

Councillor Wayne Davies, cabinet member for economic development at the council, said: “It’s fantastic that we have attracted a big hotel chain to the area.

“This development with the new leisure facilities based at Coatham would really help regenerate the area and would be a huge boost for our tourism offer.

“The Coatham area is close to Redcar’s town centre, train station, and the UK’s largest industrial zone Teesworks, so the hotel would really be in prime position.

“We are also working with the hotel group to ensure that local people benefit from the new jobs created through the project.

“It has been the Council’s long-term ambition to transform the Coatham area into a leisure destination for visitors and our residents, so it’s fantastic to see that major progress is being made and plans are coming to fruition.”

Darren Winter, chair of the Redcar Town Board, said: “Coatham is an important gateway into Redcar and after many years of blueprints, The Town Deal Board are delighted to have helped support this exciting development with Town Deal funding provided by the government.

“It will create a fantastic first impression to visitors, support business, job creation and the wider Town Investment Plan with our proposal of £25m of projects which will be presented for approval to government in January.”

Listen, talk, trust, be open and honest. Those were the words of advice from five leading lights on the Tees business scene when asked about […]

With the deadline for submitting freeport bids only six working days away, PD Ports has thanked over 100 customers and stakeholders for their support. Since […]