Plans have been unveiled for three new buildings – one seven-storeys high – in the rapidly-developing Centre Square area of Middlesbrough.

Ashall Projects – the company behind the successful Centre Square office development – is putting forward new proposals which will “dramatically transform” the town centre.

The developers have unveiled revised plans for three more office buildings, including one which will be seven-storeys high and has a floor space of more than 100,000 sq ft.

This is similar to the combined area of the two existing Centre Square buildings.

There will be a small amphitheatre with sculptural seating, meeting spaces and provision for a digital screen for community events.

The outline planning application for Ashall Projects’ revised masterplan will be submitted to Middlesbrough Council next week and the developer is inviting residents to have their say.

Architect Sarah Sabin, of Seymour Architecture, said the approach had been to “develop a masterplan that offers an attractive, sustainable and flexible development which offers a great working environment coupled with a vibrant public realm which can be used both by staff and the local community”.

The first two buildings – One and Two Centre Square – had begun to create an office complex which, she said “encapsulates the desire to provide a commercial quarter to the town and premier office development for the wider region.” The revised masterplan “looks to respond to the requirements of the current market”.

The details of the new Centre Square proposals are being made public amid a growing campaign to persuade the government to move hundreds of civil service jobs from London to Middlesbrough.

“By bringing these plans forward we want to give Middlesbrough the best possible opportunity to secure these jobs in a location which generates the most benefit for the town and we wanted to show that Centre Square can accommodate them,” said Mark Ashall, the director of Ashall projects. 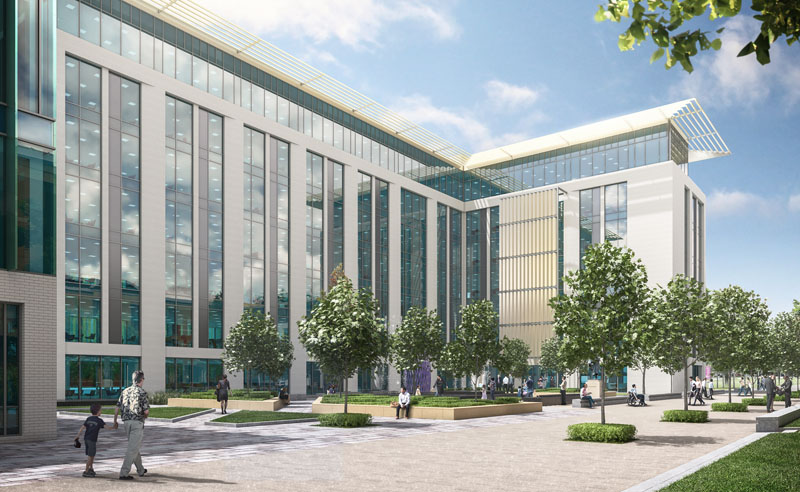 “Over the past five years our partnership with Middlesbrough Council has delivered the first phase of the Centre Square development on time and on budget, and it’s already achieved its objective of attracting great businesses providing good well-paid jobs. Now is the perfect time for the next stage, to build on this success.

“We believe our plans for new quality, sustainable Grade A offices in Centre Square represent the best option for the Treasury and its staff, and bringing these jobs into the centre of Middlesbrough will maximise the economic return for the town and Teesside.”

Ashall Projects has already submitted a planning application to Middlesbrough Council for Six Centre Square: a four-storey office development, with a floor space of nearly 47,000 sq ft, on a vacant site in Melrose Street.

In the revised masterplan, there would be an adjacent building – also over four-storeys and with a floor space of 37,500 sq ft. The pair would provide a stronger connection between Borough Road and Centre Square.

The fresh proposal sees another four-storey building – with a floor space of just over 18,600 sq ft – to be constructed next to the Law Courts and act as a gateway to the Centre Square development when approached from the A66 and Corporation Road.

The fourth new building – the seven-storey development – would be located in the heart of the development, opposite the Law Courts and one of the existing Centre Square buildings at the far end of the site.

The new offices – with a total floor space of more than 200,000 sq ft – could provide accommodation for the 800 Treasury jobs and a further 1000 staff employed by other occupiers.

Ashall Projects say the buildings could be delivered within two years, subject to planning permission being granted.

The Centre Square project was launched more than five years ago following a study into the Tees Valley economy by the think tank The Centre for Cities.

It found that in the centre of Middlesbrough there was a smaller proportion of well-paid so-called “knowledge intensive business jobs” compared to places like Leeds. Middlesbrough was also over-reliant on retail.

Centre for Cities research has consistently shown that an increased concentration of these types of jobs in the centres of towns and cities has led to increased levels of innovation and productivity and additional economic activity.

This has led it to conclude that moving the Treasury North jobs into the centre of Middlesbrough would maximise a wider impact and benefit in the area.

This would happen through generating town centre re-development – with the next phase of the Centre Square project – and increasing footfall as the office workers support the high street and local businesses.

There would also be an additional demand for the Teesside public transport network whose hub is Middlesbrough.

Ashall Projects was granted outline planning permission in 2017 for five office buildings, which would accommodate 1,500 employees. The revised plan will see one additional new building.

Since then, the development has become the established Grade A office hub for Middlesbrough and the region.

Following the completion of One and Two Centre Square, which in 2019 won the coveted LABC award and were nominated for numerous industry awards, 85% of the available office space has been let to four employers – including the largest single letting in Middlesbrough for 25 years – and the first of a thousand staff from these companies have begun to move in.

You can view the new plans for Centre Square – and leave your comments – at centre-square.co.uk/public-consultation/.