During the visit, PD Ports CEO Frans Calje thanked the government for delivering an opportunity that could create up to 32,000 new jobs and add £2 billion to the region’s economy.

As Statutory Harbour Authority for the River Tees, PD Ports has worked tirelessly to support the Tees Valley mayor’s freeport bid, consulting with more than 100 businesses and organisations to develop plans that will maximise the benefits that a freeport can bring.

The freeport development builds on PD Ports’ track record of attracting over £1 billion of new investment to Teesside in the last 10 years and forms part of a new vision to make the River Tees the UK’s most successful port region by 2050.

Presenting the vision to the prime minister and the chancellor, PD Ports’ chief operating officer and vice chairman Jerry Hopkinson highlighted a number of other exciting developments that will see the firm help deliver a further £1 billion of investment within the next five years alone.

These developments include the new £185m Northern Gateway Container Terminal that will triple Teesport’s container handling capacity to meet rising demand from customers eager to reduce their reliance on congested ports in the south.

As well as offering more resilient and reliable links to international markets, the new terminal will also help reduce the distance that cargo travels on UK roads, delivering significant reductions in CO2 emissions. 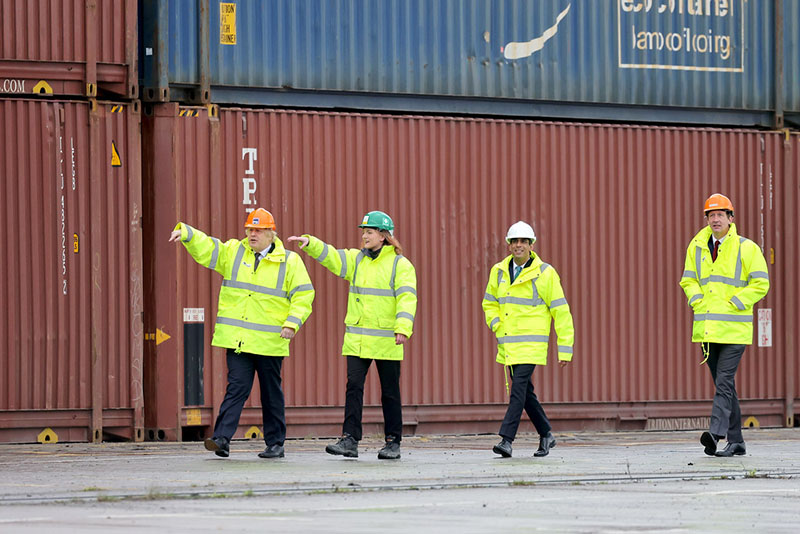 PD Ports is home to the most ambitious apprenticeship programme in the UK ports industry with 152 current and former apprentices working across the business. As the UK’s number one port operator for supporting young people, PD Ports is planning to recruit a further 30 apprentices in the coming months and continues to intensify its efforts to help those most affected by the Covid-19 crisis.

“It has been a privilege to welcome the prime minister and the chancellor to Teesport at the beginning of a new chapter in our region’s renaissance,” said Mr Calje. “We are immensely grateful for the opportunity that the government has given us in awarding freeport status and look forward to continuing to work closely with the government to maximise the benefits this will bring.

“Freeport status will enable PD Ports to build on our successful track record of attracting new investment and creating new jobs across the region, with more people now employed by PD Ports than before the devastating closure of the SSI Steel Plant in 2015.

“Alongside other new developments planned by PD Ports, including the Northern Gateway Container Terminal, freeport status is another major step towards achieving our ambition to make the River Tees the UK’s most successful port region by 2050.

“The River Tees is a national asset that has huge potential to drive global trade and exports, level-up our economy and lead the fight against climate change. Our new freeport will help us unleash that potential and deliver the prosperity this region deserves.”

Mr Sunak said: “It was great to be in Teesport as we confirm that we’re bringing a freeport to the area. Our eight new freeports across England will unlock billions of pounds of private investment, generate trade and create thousands of jobs in communities like Tees Valley, giving people optimism and ambition for the future as we build back better from the pandemic.”