At least 750 jobs are heading to Teesside – and potentially 1,500 more in the supply chain – after details of a new multi-million pound wind turbine blade manufacturing site were revealed on Wednesday night.

Global offshore wind manufacturer GE Renewable Energy will build a new state-of-the-art facility on the banks of the River Tees.

The blades produced by GE Renewable Energy at the Teesworks site will be supplied to the Dogger Bank wind farm, around 80 miles off the coast.

When completed in 2026, Dogger Bank will be the largest offshore wind farm in the UK and will be capable of powering up to six million homes.

Teesworks is being supported with £20m of government cash towards the build-out of the new heavy lift quay being built on the site, with the expectation that South Bank will house up to three manufacturers to support the development of the next-generation of offshore wind projects, substantially boosting the UK’s offshore wind manufacturing base and creating thousands of local jobs.

The news comes just days after it was announced in the spring budget that Teesside would become the UK’s largest Freeport following a successful bid led by Tees Valley mayor Ben Houchen – a condition that was the deciding factor for GE Renewables Energy.

Mayor Houchen said: “This monumental deal reached today with GE Renewable Energy, to bring their multimillion-pound manufacturing facility to Teesside and creating more than 2,000 local jobs, is a major step forward for my plan to bring skilled good-quality jobs to local people.

“Having a global manufacturer with the calibre and reputation of GE Renewable Energy, in the UK’s largest freeport with the skills and expertise we have in the region, shows just how far we’ve come with our plan to regenerate a site that sorely needs it. 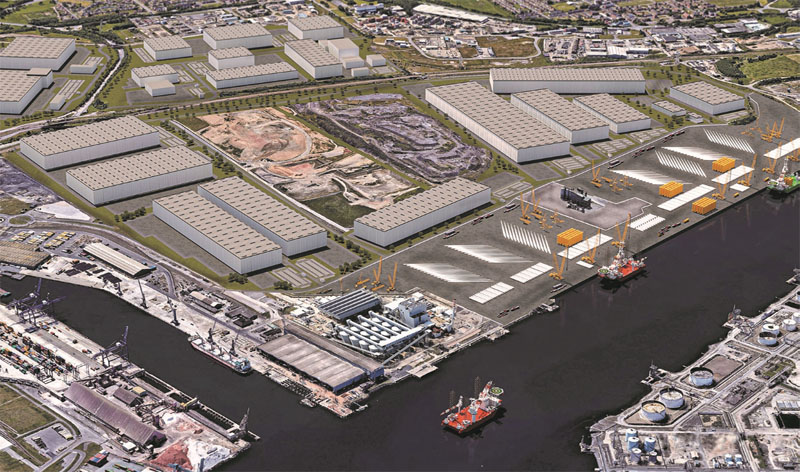 The CGI above shows how Teesworks could look after redevelopment

“Just last week our plans to regenerate the Teesworks site were turbocharged when the chancellor gave the green light to the Teesside Freeport – the UK’s biggest freeport.

“But this is just the beginning. There’s still a long way to go to fulfil our plans, but if we continue on this path – soon the entire Teesworks site will be home to thousands more jobs and Teesside will lead the UK in net zero manufacturing, energy and innovation.

“The mark of the Infant Hercules can still today be seen and felt across the world, but this is not our past. It is our today and our future.

“With this new beginning we will continue to build a new, clean, green and brighter world.”

Once complete, the Teesworks port will have the potential to support the development of 100 turbines per year.

Through the new port, businesses – including smaller suppliers – across the UK will be well-placed to win contracts and attract further investment from energy companies around the world, increasing their competitive standing on the global stage.

Paris-based GE, which reportedly emerged as the global number one spot in terms of wind capacity market share in 2020, opted for Teesside ahead of a site in France.

Its president and CEO Jerôme Pécresse said: “This new plant will contribute to the development of an industrial cluster dedicated to offshore wind in the North East of England.

“GE is delighted to be able to help build a talent pool dedicated to renewable energy in a region with such potential. The UK’s target to commission 40GW of offshore wind by 2030 is ambitious and requires that we invest in the local production capabilities to accompany this effort.”

“This announcement marks the start of the next generation of offshore wind manufacturing.”

Today’s successful farmers know that it takes much more than agricultural expertise to grow a profitable business. With fears that the UK agriculture sector would […]