Award-winning director Chloë Clover has spoken about how Middlesbrough-based Wander Films is breaking the mould for business speak and her special bond with MD and life partner Lou Tonner.

Wander Films’ creative director Chloë launched herself into the corporate world of the Tees region like a whirlwind two-and-a-half years ago, shaking up the way businesses portray themselves though film and social media while adding a welcome splash of colour to our industrial landscape.

Alongside Lou, Chloë heads up a team of creative minds who make high-impact videos and social media campaigns that give their clients an edgy and memorable platform for their products and services.

“We wanted to do something to blow the scene up completely,” said Chloë, speaking on the Thirteen-sponsored Tees Business online chat, Talking Business.

“We wanted to be different, to get ourselves and our clients noticed, and the way we’ve done that is by being true to ourselves.

“The whole suit-wearing thing just wasn’t us. Embracing our difference has got us noticed. More importantly, people can see that we’re genuine and we love what we do.”

She laughed: “Saying ‘Fricking’ and ‘Stoked’, well that’s just who we are. We revel in going against the grain and pushing the boundaries.”

Non-conforming is always a risk, especially when you have no experience of the corporate world, but it’s one that’s paid off for Wander.

Since its inception in 2018, the company has flourished, and the awards continue to flow in.

In the past 12 months alone, Wander won Business of the Year Best at the Tees Businesswomen Awards while Chloë herself won Best Newcomer at the same event and Rising Star at the inaugural Tees Tech Awards. 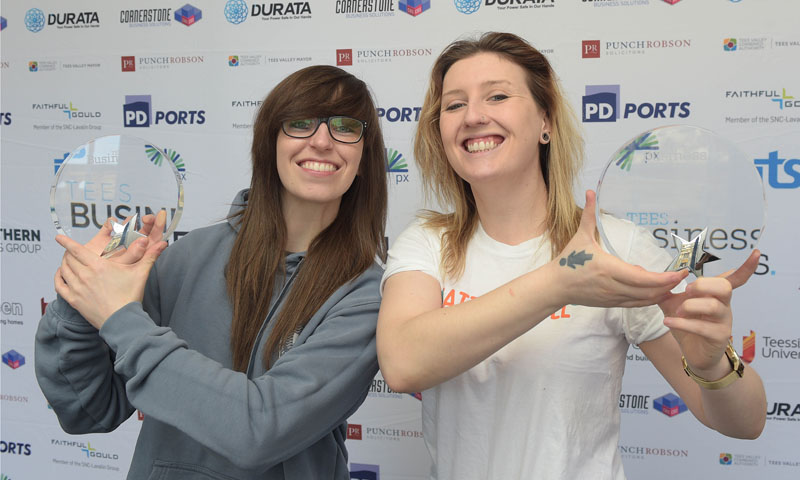 “It’s awesome, I still haven’t got used to it,” said Chloë, who now heads a team of ten.

“Her reaction showed just how much the award meant to all of us, and it was also a kind of a release after a very difficult year.

“The pandemic was terrifying, with worries of it all falling apart, but Lou also lost a loved one, so it was extra tough on her.”

Chloë hasn’t previously spoken publicly about her relationship with Lou, not wishing for their personal relationship to define Wander but she felt it was time to talk openly about close bond.

“Lots of people say they couldn’t work with their other half, but we’re like two parts of the same person,” reflected Chloë. 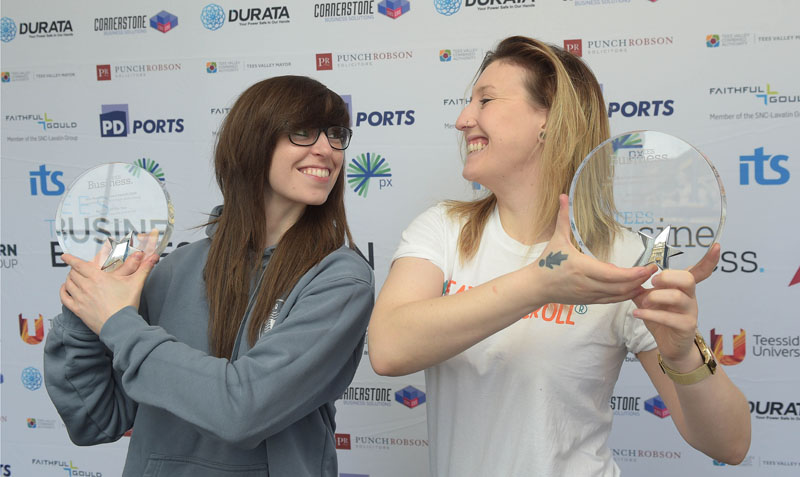 “I can literally spend every second of the day with Lou and it’s not hard – it’s as natural as being by myself.”

Talking about Wander, however, even when they’re away from the business is a given.

“There’s never a time when we don’t talk about the company, but I think that’s really amazing because we both love it so much.”

The fledging Wander Films took shape as Lou and Chloe were coming to the end of two years travelling the world.

“We had wanted to find ourselves, so we saved for a year then sold everything we had and bought a one-way ticket to Australia,” she recalled.

“While we were travelling, we were given the opportunity to work on a TV pilot and the penny dropped that this is what we should be doing.

“One day we were sat on a beach together and we agreed that we needed to go home. If we wanted to make this thing happen, we needed to be on Teesside. I’m a Redcar lass and Lou is from Grove Hill – Teesside defines who we are and inspires us.”

For the future, Chloë’s plans are to continue to grow the Wander brand by investing in new talent which will allow them to increase their offering.

“There’s a lot of homegrown talent here, but we also need to bring in people from outside the area who have different visions. Ideally, we will bring people back to their hometown who have been away and learned new skills.

“It’s up to us to keep pushing forward and show that it’s worth being here and that there’s some really cool stuff going on in the Tees Valley that they can get involved with.”