One of the region’s oldest engineering firms is breaking new ground in global export markets, after heading back to the (virtual) classroom.

Tomlinson Hall & Co, of Billingham, has distributed pumps and power transmissions since 1919, primarily for the UK market, but has spent the last six years establishing itself as a worldwide player.

With its own Liquivac pump Tomlinson Hall is rapidly becoming globally recognised as one of the UK’s “premier pump people”, after “graduating” from the Department for International Trade’s “Export Academy”.

Since 2015, the business has gone from exporting a small number of pumps to customers in Germany, to distributing Liquivac and other pump products into over 80 foreign markets, with the business signing up several members of staff to the Academy to further grow exports.

From firms new to international trade, to those already trading, but needing to upskill staff or requiring a knowledge refresh.

Over a century, the family-owned company established a reputation distributing some of the most efficient pumps on the market, becoming a trusted supplier to distilleries and the food and drink, pharmaceutical, utilities and chemical sectors.

However, success in a DIT competition in 2015 cemented a relationship that has seen Tomlinson Hall open markets across Europe, the Middle East, North America, South America and Asia.

“We had been exporting some pumps, but it was winning the “Golden Ticket to Dubai” contest in 2015 that really lit a fire under our export success,” said business development director, Colin Simpson, an experienced exporter who decided to refresh his own knowledge and skills with the Export Academy.

“We worked with the DIT to understand the market, travelled with Emirates and suddenly here was this opportunity to put our product in front of a new and rapidly developing market.

“Also being invited to join the DIT’s Northern Powerhouse Export Ambassadors programme has continued to broaden our knowledge and grow our opportunity. 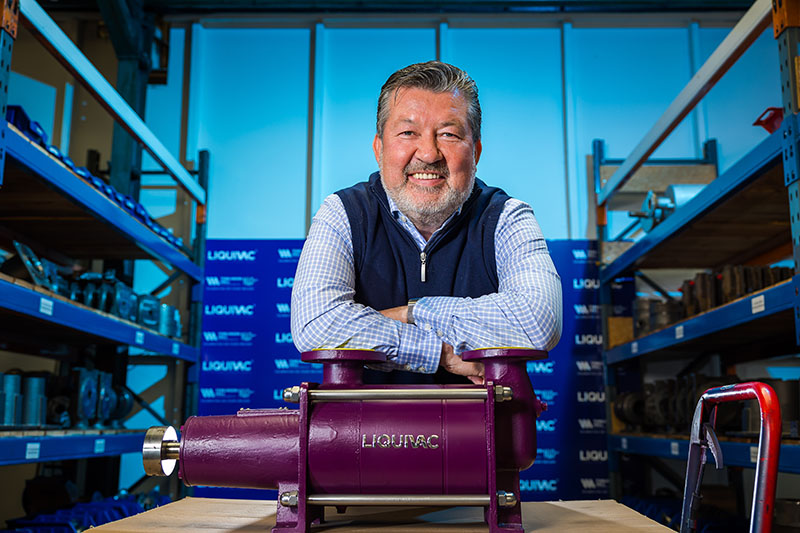 “We have supplied pumps for the de-watering of the Abu Dhabi Grand Prix Circuit and other major water desalination projects in the Middle & Far East to help create drinking water from seawater – huge projects that offered us a great entry into these markets.”

The firm also distributes pumps for a host of recognised industry manufacturers and works with the University of Teesside on R&D to enhance pump performance.

He added: “75 per cent of industry pumps are blue, so we made ours purple – we’re the “Purple Pump People”!

“It’s simple, but we stand out. We work closely with the university on R&D across our product range, so we’re constantly improving performance and efficiency.

“Our business recognises the skills and experience we have around us. That’s why we work with the DIT.

“We’ve established an excellent relationship with them and the Export Academy was fantastic to update my knowledge.

“We’re using it to prepare a number of employees to operate overseas. Anyone thinking of exporting should utilise their skill and experience.”

Tomlinson Hall is an eight-time winner of the UK Pump Distributor of the Year Award and the North East Process Industry Cluster (NEPIC) named it SME of the Year. They were named North East Automotive Alliance (NEAA) SME Company of the Year and were also recently announced as 2020 Northern Powerhouse High Growth Markets Exporter of the Year.

Julie Underwood, executive director of International Trade, North East England Chamber of Commerce, said: “Tomlinson Hall is never a company to rest on its laurels. An experienced exporter, Colin, who is now a Northern Powerhouse Export Champion, attended our Export Academy to refresh his knowledge and skills.

“So embedded is the ethos for continuous improvement, the business used the course as a tool to upskill several members of staff, to help educate them to just what goes on before the sale of products overseas.

“I wish everyone at Tomlinson Hall success as they continue to build on their impressive global reputation.”

A huge fertiliser mine scheme in North Yorkshire is now employing 1,300 people full-time, the firm behind it has revealed. And Anglo American says that […]

A world leader in biotechnology development – including the manufacture of a coronavirus vaccine – has officially launched its new Billingham BioCampus. Boosted by £3.6m […]